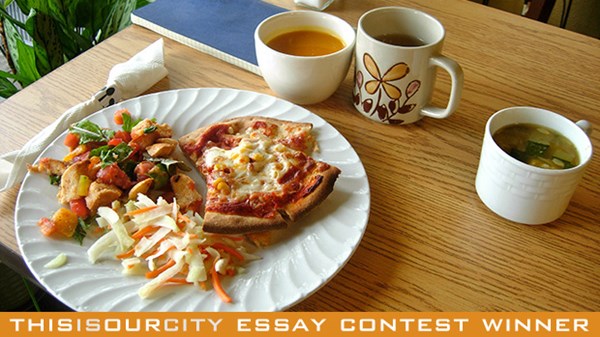 The walls are Shrek green, the stainless steel lights, violet trim, and framed photos of organic food giving the space a modern flavor. Menus listed on flat-screen TVs above the counter feature pita sandwiches, Mediterranean salads, chicken enchilada soup—and no prices. As I approach the counter and breathe in the aroma of freshly baking pizza dough, the beaming clerk takes my order: grilled flatbread veggie pizza, apple walnut salad, and loaded potato soup. But as I pull out my wallet, the employee asks an odd question, one that stays with me all afternoon: "What would you like to donate today?"

I'm there to meet Cathy Mathews, co-founder and executive director of Café 180 in Englewood, Colorado. As I take in my first trip to a pay-what-you-can restaurant—what some are calling a new hybrid movement in business and social entrepreneurship—I peer out the window: a thrift store, a post office, a tailor. To my north is an abandoned building. The contrast between the buzzing café and its neighbors is stark. But no starker than the difference between the customers here eating lunch: a businessman, two elderly ladies, a middle-aged mother, and a man wearing several coats and a tattered winter cap.

Going out for a meal tends to segregate age, race, and social class, based on one's ability to pay. At Café 180, the serrated knife that separates wealthy and poor is laid down next to plate, fork, and spoon on the table of fellowship. Here is a radical culinary experiment in dignity and community.

Two Cafés and a Dash of Dignity

Albert Edward Day wrote, "Lazarus sometimes makes his way to our door step. We toss him a coin and go on our way. We give our charities but we do not give ourselves." In early 2010, Cathy Mathews began to grow similarly wary of "charity." A resident of Cherry Hills Village, an affluent Denver suburb, she began to wonder about her neighbors in low-income Englewood, seven minutes away. "We drop off food and clothes, but there remains a barrier between the person giving and the person receiving," she tells me over lunch. "What if there was more engagement? What would that relationship look like? How would it benefit both giver and receiver?"

After a visit to Denver's first pay-what-you-can restaurant, SAME (So All May Eat) Café off historic Colfax Avenue, Mathews felt prompted by God. "This facility was a Spicy Pickle," she remembers. "I joke with my staff: I had this 'spicy pickle feeling' I should leave my name and number and see if I could just assume the lease." After ignoring two "spicy pickle feelings," she finally left her name and number for the manager. He called her right away; he was ready to hand her the keys. People, financing, and plans began to align, and Café 180 opened its doors in December 2010.

The idea is simple: Healthy and delicious food is available to all, regardless of their ability to pay. Customers are asked either to pay a donation for their meal, or if they can't pay, to volunteer. Café 180 espouses a philosophy of pay-what-you-can, not pay-if-you-can. All are expected to participate in the community and give a certain amount. Mathews says that about 30 percent of customers volunteer for their meal, 50 percent pay what their meal is worth, and 20 percent pay it forward. Officially organized as a nonprofit, with a volunteer coordinator and 250 regular volunteers, Café 180 nonetheless functions as a business. A chef runs the kitchen, each plate is checked for quality, and each diner is considered a cherished customer.

But the bottom line for pay-what-can restaurants isn't profit. Instead, it's dignity for the poor, a vibrant and diverse community, and subtle life transformation. Dignity is what motivated Libby Burky of Denver to open SAME Café. "We used to volunteer at a soup kitchen in Peoria, Illinois," Burky recalls. "The quality of food wasn't so great. People weren't treated with dignity, and they weren't really being helped. Those we served the first day were the same people we served four years later." That experience planted the seeds that bloomed into organic, all-natural meals for Burky's customers. Yet delectable fare was only the first level of empowering the homeless and working poor. By requiring all to pay for their meal, by money or volunteer labor, she also removed the shame of receiving a handout.

The spirit of giving at Café 180 forges an eclectic community of wealthy and poor, young and old, secular and Christian. When poor and wealthy volunteer side by side, their stories begin to overlap. Friendships are built across neighborhood lines, and the kitchen unites strangers in a common task. Mathews believes the kitchen spills out into the dining room, where sales executive and a single mother of four eat the same French Dip sandwich. "What I love is that the concept appeals to so many people," Mathews said. "Rich, poor, Republican, Democrat—taking care of your neighbor has universal appeal."

At 10:45am, 15 minutes before SAME Café opens, a volunteer pounds on the door. "I need lunch! I have to leave by 11:20 for work!" As Burky motions to John, she explains that three years ago he was estranged from family and living on the streets of northeast Denver. Also an alcoholic, he came to SAME Café for a meal and began volunteering twice a week. He quickly realized he couldn't show up to work intoxicated. Over time, the relationships at SAME Café brought him back from social exile, and the responsibilities of volunteering prepared him for his current job (canvassing for a political campaign). Not wanting to miss the bus, John devoured his corn, bacon, and bleu cheese pizza. "I like the concept," he says with a mouth full of pizza crust. "The love. The food. The ability to pay what you can, which includes giving some work. I'm in early recovery from alcoholism. So, if I sign up on the shift here, I really need to be here."

Yet transformation isn't a one-way street. "I think people come with the idea that they're going to give back," Mathews said, referring to her wealthier volunteers. "But I hope they're ambushed a bit. I hope they're less detached in their giving. I want them to see their own poverty as well, and recognize a sense of solidarity with the poor."

Gentrification and the Ladle

Like any new business endeavor, pay-what-you-can restaurants come with their own challenges, namely freeloaders. Babu, an Indian restaurant in New York City, stopped offering its food on a pay-what-you-think-is-fair basis after a group of 10 unruly young Indians left nothing, not even a tip, after an evening meal. In 2006, the Terra Bite Lounge in Kirkland, Washington, began to charge for its meals after owner Ervin Peretz dropped the model primarily due to location (a neighborhood popular with teenagers). It's now closed.

The key to success in pay-what-you-can restaurants is location. "You need people who can pay it forward, and people paying what they typically would for lunch," says Mathews. "And, of course, you need a group that would benefit from the concept: the unemployed, the underemployed, the homeless—those who for whatever reason would value volunteering in exchange for a meal." In short, you need both Cherry Hills Village and Englewood, Solomon and Lazarus gathering in the same zip code.

For all the problems attached to it, gentrification—wealthy people moving into urban and historically low-income communities—is providing such cross-sections across the United States. Young professionals, including Christians, have moved into cities in record numbers in the past 15 years, repairing historic homes and bringing new businesses. But gentrification often ignites new waves of class tension. As the wealthy move into the city, they bring rising house prices. As a result, many urban poor flee to the suburbs to find affordable housing. Those left in the city often feel like cast members from Survivor, surrounded by artists and land developers that often "revitalize" the city with little thought for families who had lived there for generations.

Pay-what-you-can restaurants might just heal many of these tensions. A defining feature of modern American cities and suburbs is the close proximity of wealthy and poor. This happens to be the necessary ingredient for starting a pay-what-you-can restaurant. And institutions like Café 180 and SAME Café have brought strangers together at a common table and created a transformational community for both giver and receiver. Could America's growing class inequality be conquered by the power of the ladle?

"What would you like to donate today?" It's a frustrating question when you're getting ready to pay for lunch. I wanted to eat in independence, free from the inconvenience of other people. But the question drives me to consider the hunger of the man wearing three coats, or the spiritual hunger, perhaps, of the man in a yellow tie. The question beckons me to participate in Café 180's mission, into the caverns of my conscience to make a decision. How will I contribute to this community? What will I give today?

Jesus had a habit of eating with people. Tax collectors and prostitutes, Pharisees and fisherman, radicals and lepers ate at his table. The night Jesus was betrayed, he shared a meal with his friends, and alluded to the day when people from every nation, class, and ethnicity would dine with him at the wedding feast of the Lamb. As I put on my backpack and leave Café 180, the flavor of grilled flatbread pizza lingers on my taste buds. I lick my lips, and savor a foretaste of the kingdom of heaven.