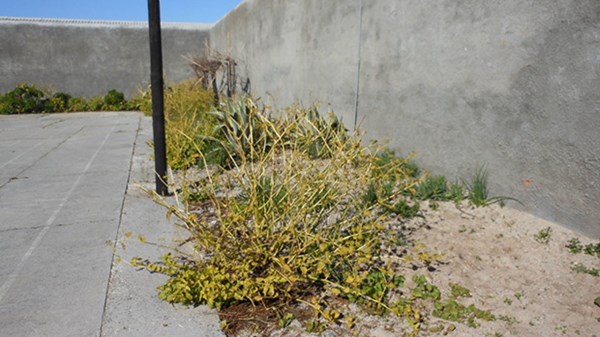 Even though we know we can't usher in God's kingdom, we're still called to establish order, beauty, and abundance in this life.
Skye Jethani

The beauty of Cape Town, South Africa, can only be appreciated when viewed from the sea. Rising from of the waters of the South Atlantic, the city's layers build upon each other—colonial stone structures along the coast, then glass and steal skyscrapers, then rolling foothills of green farmland and vineyards, and finally the breathtaking wall of amethyst stone known as Table Mountain, which serves as the canvas for the whole scene.

Cape Town's stunning beauty makes the horrors of its past that much uglier. The policy of apartheid divided races, disempowered millions of people, and sparked countless cycles of violence and retribution. For his efforts to end apartheid and establish justice, Nelson Mandela became a prisoner of the state for 27 years. I was familiar with Mandela's story before traveling to South Africa, but being there helped me sense the agony of his imprisonment in a new way. It wasn't the tiny barren cell he occupied with only a bucket for a toilet, or the back-breaking physical labor he endured in the quarry that got my attention. It was the view. Mandela spent most of his imprisonment on Robben Island, just seven kilometers off the coast of Cape Town. The island is blessed with an unparalleled view of the city.

During his imprisonment, Mandela could see the remarkable beauty of his home, but he could not reach it. Seven kilometers of hostile waters barred the way. As a result, Robben Island provided a peculiar kind of torture shared by few other prisons (Alcatraz and Devil's Island come to mind). It allowed Mandela to see freedom but not possess it. Still, Mandela was not without hope. To cope with the gap between his vision and his reality, he did something very ordinary: He planted a garden. After years of petitioning the authorities, they finally permitted their most famous inmate to cultivate a small garden in one corner of the prison yard. He started with just a few seeds collected from around the island and spent hours every day working his plot, studying growing techniques, and testing fertilizers (pigeon manure worked particularly well). Over time, his garden became a refuge for both prisoners and guards who shared in its bounty of vegetables and flowers. Mandela later explained that for him, the garden was "a small taste of freedom."

If we read our Bibles carefully, we shouldn't be surprised that Mandela found the strength to overcome his circumstances through the simple act of gardening. In Genesis 2:8-9 we read, "The Lord God planted a garden in the east, and there he put the man whom he had formed. And out of the ground the Lord God made to spring up every tree that was pleasent to the sight and good for food."

Early rabbinical scholars saw in these verses everything that is necessary for shalom—for what we at the City project are calling comprehensive flourishing. First, they saw order. The garden was not random or accidental; God planted it. It had purpose and intent. This is what differentiates a garden from an verdant jungle--there is a gardener orchestrating it. Second, they noted that the beauty of the trees is listed in the verse ahead of their usefulness. Beauty is necessary for human flourishing. We crave it in our spirits as it draws us toward the beauty of God. Finally, the garden contained every tree that was good for food. There was an abundance of resources to meet every physical need.

Order, beauty, and abundance—these are what we need to flourish. And yet these are not the qualities we often experience in our fallen world. Instead we face an uncrossable sea between the world we desire and the one we occupy. Just as Mandela could see Cape Town but could not reach it, so we can see in our imaginations the world as it should be—the future New Jerusalem, the garden city of God—but it does not match the barren wilderness we experience in the present. Between today and tomorrow lie the cold waters of reality.

How do we cross the gap between our vision and our reality? We plant gardens. We work to cultivate a small piece of the wilderness of this world so that it reflects what we know the world ought to be. When we do this successfully, it brings hope—a small taste of freedom, as Mandela discovered.

Consider John the Baptist locked away in Herod's prison. In that terrible place, all he could see was the wilderness of this world, the injustice and evil of corrupt systems and men. Filled with doubt, John sent his friends to Jesus to ask, "Are you the one?"

Jesus did not condemn John for his lack of faith. Instead he said, "Go tell John what you have seen. The deaf hear, the lame walk, lepers are cleansed, the dead are raised, and the poor have the good news preached to them." Jesus helps John see what he is cultivating—the way he was reaching across the gap and planting the order, beauty, and abundance of God's kingdom within the wilderness of the world.

Jesus is the Gardener who comes to cultivate the kingdom of God among us. He comes to bring order from chaos—he calmed the storm with just a word. He brings beauty from ugliness—he restored bodies and raised the dead to life. He brings abundance from scarcity—he fed multitudes with just a few fish and loaves. And when his Spirit comes upon his people, we see them cultivating the very same things. At times this occurs through miracles, as when Peter healed the paralytic outside the Temple (Acts 3). Other times it occurs through transformed lives, like when the disciples shared everything in common so that none were in need (Acts 2, Acts 4).

We, the people of Christ, are here to plant the seeds of his kingdom; to cultivate gardens of order, beauty, and abundance in the wilderness of this world. These gardens not only draw people to our God, and they not only point to the restoration of all things that is yet to come. The gardens we cultivate through the resurrection power of Christ also bring flourishing here and now. They bring life into our communities. They bridge the gap between the world that is and the world that is yet to come.

My friend Walter Crutchfield represents this kind of kingdom cultivation. Through his communion with Christ, Walter came to see his vocation as a real-estate developer as part of God's kingdom. Rather than simply looking for economic opportunities to develop real estate in Phoenix, he also looks for ways to bring comprehensive transformation to depressed neighborhoods. When he found an ugly, dilapidated property in an under-resourced area of Phoenix, he saw more than a business opportunity. By restoring the historic buildings on the sight, Walter brought order to a neighborhood struggling under chaos. He also wasn't merely interested in building a useful space, but a beautiful one, with plants and color and architectural interest. Finally, by welcoming businesses into the spaces, he cultivated abundance, creating jobs where none existed. Walter is not just making decisions that are good for him and his business. He is making common-good decisions that bring flourishing to a whole community.

Of course Walter isn't the only one. In my time in Phoenix I've encountered medical workers, teachers, city planners, artists, community organizers, pastors, and many others who want to see the order, beauty, and abundance of God's kingdom cultivated in their city. And they're making common-good decisions that results in the flourishing not just of Christians, but all people. They are reaching across the gap to bring glimpses of the future into the present.

We are not naive. We don't believe that our work here will, by itself, usher in the fullness of God's kingdom, just as Mandela knew he could never transform Robben Island into Cape Town. There remains an impassible gap between the world we occupy and the one that is to be revealed. Still, we believe that the day is coming when the distance between these two worlds will be bridged—when Christ will return, and the power of his resurrection will be unleashed, as Paul says in Romans 8, and creation itself will be set free from its captivity to futility. On that day, all the world will flourish with the order, beauty, and abundance of God. In faith we believe that which we have done in the present, and which is built on the foundation of Christ, will endure as part of his new creation.

Until that day, while the gap between our world and that one exists, we will continue to plant our seeds, to cultivate our gardens, and to watch the kingdom in which all people flourish grow.

Skye Jethani is an ordained pastor and senior editor of Leadership Journal.

This is a beautiful and hopeful essay that reminds us that some good can be grown in the most unlikely places thru faith in our Creator who patiently works in our hearts. A practical way to accelerate the growth of Jesus in us is to return to the practice of the early church - the dialogue that Paul practiced (Acts 20:7) and encouraged among the Corinthians, 1 Cor. 14:31. Joel(2:28-9) and Malachi(3:16) foretold it. Speaking our faith grows & clarifys it(Eph.4:15-16). The common good is expressed by a common voice, discerned by the faith community, 1 Cor.14:29. The priesthood of ALL believers, 1 Pet.2:9, has been ignored too long. The desire to direct others, Lk. 7:32, 9:49-50, comes from our relentless pride, not the Spirit of God. We should admit the Lord's love for diversity in his garden is much greater than ours, and that a clergy-laity format hinders his growth in us. 2 Cor. 4:13. wayne7282@gmail.com