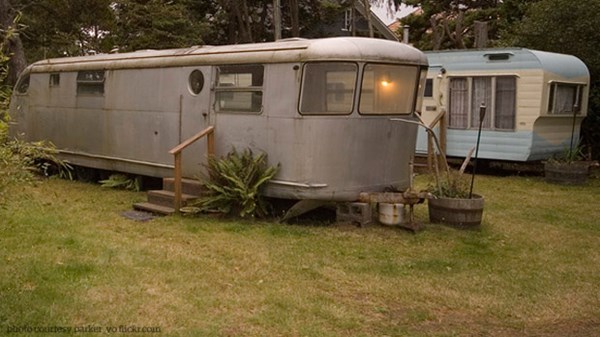 God Called Me to Move to the Trailer Park

"God, I can't do what I love and continue to work full-time."

The day after Kim Dougherty prayed this in 2009, she found out that she and several other employees of Trinity International University in Deerfield, Illinois, were being laid off due to recession-based woes. Trinity's director of student accounting, Dougherty had worked at the evangelical college for more than a decade.

Career coaches routinely counsel clients to consider a layoff an opportunity to reinvent themselves. But Dougherty wasn't looking to discover a "second act" to her career.

She had all the inspiration she needed the moment she left her comfortable office each day. Evenings and weekends were packed with ministry to the marginalized and underserved in her community, mentoring children and teens; spearheading a county-wide food drive; and joining a volunteer group that provided short-term shelter to some of her county's homeless.

And then there was the nearby trailer park. Dougherty had been providing practical assistance to a few low-income residents of a mobile home park in Wauconda, Illinois. "Many people in town do not realize the mobile home park is here," Dougherty said. "[It's] predominately white with a growing Hispanic population. Many in the park are in transition - some trying to leave an abusive relationship, battling addictions, dealing with serious mental-health issues, or fighting to find a job in the wake of a felony conviction. Every person I met was determined to be independent and successful, but most couldn't do so."

Dougherty sensed God was calling her to a simple mission: become a good neighbor to her new friends at the park. "Relationships are a critical need in this community, though many would have trouble admitting it," Dougherty said. "Many live isolated and lonely lives that make interacting with people a real challenge. They have few social skills, if any. What they need most is what they are least likely to pursue and least able to supply for themselves."

Her choice seemed to many like a downgrade of her already simple lifestyle in the wake of an unexpected layoff, but Dougherty was convinced her next step was part of God's call. She moved into the trailer park as a missionary.

"I began receiving unemployment after I lost my job, but eventually told the state that I could no longer receive the checks in good conscience because I was no longer looking for full-time work." Instead, Dougherty pieced together some part-time work and drew support from a few partners who believed in her call. She also became a resident (intern) with the Chicago hub of Forge America, a missional network training program founded in 2010 by theologian Alan Hirsch.

"It is the people living in the community who determine what is important in terms of transforming this neighborhood," she said. "My missional group is committed to integrating with residents. We have found an area of need that my team is uniquely suited to meet at this stage: money and life skills collaboration."

Dougherty recalls the story of a neighbor in the park who lost his job when Illinois cut funding for the disabled. The man, a single father of two who has Parkinson's, needed helping simply getting in and out of his home. Leveraging her connections to local churches and Love INC Lake County Southwest, Dougherty arranged to build the man a ramp. But she didn't stop there. "We realized . . . he needed help getting child support, taking responsibility for his actions, pursuing other means of transportation and jobs, and help being a single father." Through Dougherty's efforts, those needs were addressed. The man eventually had to move from the park, but Dougherty and her Forge team maintain a relationship with him.

"I am becoming known in the neighborhood as a trusted friend, not someone coming from outside to impose my will," she said. She does what friends do for one another: coordinating home repairs for those who ask for help, taking others to the grocery store with her because they don't have access to a car.

"Forge gave me a strong theological framework as well as practical help in doing mission in the first world," said Dougherty. "American culture is changing rapidly and unless the church adapts its focus and mission strategy, whole generations will be lost as has happened in Europe. Forge helped me recognize what God was already doing in the world and how I could join him in that work."

It was the work at which she'd been for the previous two decades of her life. Dougherty grew up in a troubled family, and came to faith through the ministry of a neighbor. During her high school years, she had a growing sense that she was supposed to be a missionary. "Leaders in my church said that women could do anything", Dougherty noted. However, the female role models in her world tended to be Bible teachers or ministry wives. Those models formed the grid through which Dougherty eventually interpreted her vocation.

She met her husband a West Coast Bible school, and the couple arrived in the Chicago suburbs so she could attend seminary. Her husband eventually took a staff position at a church. She plunged into ministry alongside him as her response to the calling she'd sensed as a teen.

"Yet I was always drawn to those who lived on the edge. My painful childhood gave me the emotional vocabulary to understand the hurt others experienced, and Christ gave me a message of hope to share." She enrolled at Trinity with a goal of becoming a teacher. She eventually began working for the school while attending classes.

She was on a tidy Christian ministry career track until 2002, when she learned she was pregnant for the first time in her 11-year marriage. In a span of four months, she experienced a miscarriage, the unraveling of her marriage, and the death of her mother. "I lost my church, my home, my baby, my husband, and my mother," she said.

She began attending a large church in a nearby town. After months of slipping in anonymously on Sundays and pouring her pain out to God, she asked a staff member if any seniors in the community needed their bathrooms cleaned. "That was all I had to give," she said.

Her request eventually led her to involvement with the church's nursing home ministry. As she served and worked through her losses with friends at school and church, she began to heal. Acts of practical service reconnected her with the desire she had as a young woman to live a missional life. She discovered that the very experiences that may have disqualified her from institutional ministry leadership in some settings are what gave her credibility and authority among those she now served, including her new neighbors.

Dougherty speaks with local businesspeople and church leaders about the issue of affordable housing through her involvement with Love INC Lake County Southwest, noting, "A holistic approach and strategy for my neighbors' lives is what is needed, including and especially a life surrendered to God. Yet I remind the leaders with whom I speak that we have an obligation to help those who are helpless, those who are oppressed. Housing is a key component of this, but pulling together the right components to provide meaningful solutions is not a fast process."

Little in Dougherty's life is a fast process these days, whether building a relationship with a neighbor or making the invisible residents visible to the surrounding community and to local churches. But Dougherty believes that she is exactly where she needs to be.

"I am more afraid of taking the safe road at this point in my life. I've done that, and I've discovered that it is more risky to stay on that path than to follow where God is leading."

Michelle Van Loon is the author of two books on Jesus' parables, a regular contributor to Her.meneutics, and contributes to Christ Together, a Chicago-based network "bringing the whole gospel to the whole city."

God Called Me to Move to the Trailer Park