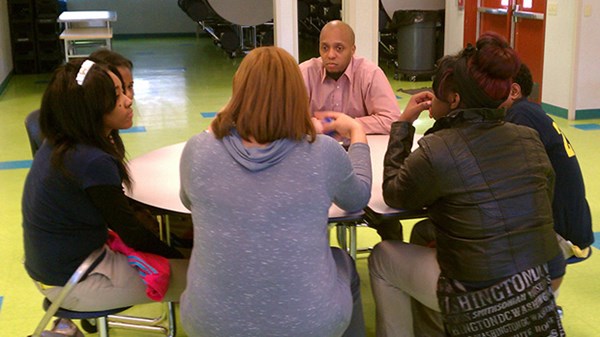 Some leaders say their city could become the first to practice restorative justice across the board.
Charles Honey

Weekend tweets and re-tweets among two girls and their friends. She says she wants to fight her, he tweets it to others, word goes around. Come Monday, the threatened girl stays home from school.

By Wednesday, four of them sit around a cafeteria table in a charter academy in Detroit, facing each other. Talking, not fighting is the way things are worked out here.

It's called a "restorative circle," and it happens a lot at Plymouth Educational Center's 9th Grade Academy near Midtown. At this and other Detroit schools, these circles, part of a systematic program called restorative practices, are becoming a popular way to resolve conflicts among Detroit students.

"We're going to talk to one another, not at one another," Howard Webb Jr., a friendly but forceful facilitator, tells the students. "We're not yelling, we're not shouting."

So what happened? Webb asks the first girl. He rolls a rubber earth-ball to her, giving her the floor.

"I guess she didn't like me," says the ninth-grader, looking at the girl. "She wanted to fight me."

The ball rolls to that girl, who objects softly. "I didn't say I wanted to fight you."

Webb rolls the ball to the other two and back around. With each roll he poses questions: What were you thinking at the time? What have you thought about since? How could you have handled it differently?

About 20 minutes in, it's clear the truth doesn't travel well through cyberspace.

"How much of this is worth your education?" Webb challenges them. "Is it worth losing?"

Certainly not, academy director Kristin Woods tells the students: "It's okay to say, 'This might be a misunderstanding. Let's talk about it.'"

Talking things through with students, and getting them to say what they feel, is what makes circles and other restorative practices so effective, advocates say. Plymouth is one of 14 Detroit schools trained in the method, which proponents believe has the potential to help restore a whole city.

"It's my personal mission to see Detroit become the first large, urban restorative city," says Henry McClendon, a Christian minister and executive of the Skillman Foundation, a private nonprofit focused on improving schools and neighborhoods for children. He has spearheaded implementing restorative practices in schools and among law enforcement and community groups.

He and other Christians see biblical roots in a philosophy that expands on the concept of restorative justice, a system of victim-offender restitution and reconciliation that has been embraced by many faith traditions. The Mennonite Central Committee established the first restorative justice program in the mid-1970s, and Prison Fellowship founder Charles Colson championed it.

Detroit schools are tackling broader problems with an array of proactive practices that include but go beyond restorative justice. By bringing people together to address wrongs, hurts, and misunderstandings, these practices can resolve or prevent conflicts and promote cooperation, proponents say. They have been used in many settings, from courts and schools to family disputes and ethnic divides.

Restorative school programs like Detroit's are "probably the most exciting and promising area of the restorative justice movement," says Mark Umbreit, founder of the Center for Restorative Justice and Peacemaking at the University of Minnesota. "It helps teach kids how to fight fair and deal with conflicts in a more open way."

Leaders of the movement in Detroit hope to help transform a struggling city with a different way of handling problems, from student fights to neighborhood gangs.

"The aim of restorative practice is to build community, and then to manage conflict by repairing harm and restoring relationships," says McClendon, a former Prison Fellowship administrator. "People are happier, more productive, and more likely to make positive changes in their behavior when those in authority do things with them rather than to them or for them."

A key partner is Black Family Development Inc., a far-reaching Detroit family counseling agency that has provided training to other agencies as well as to most of its own staff.

Chief Executive Officer Alice Thompson says the methods can help heal Detroit's rampant conflicts at the most basic level, nurturing forgiveness through personal interaction. She views Jesus as an example in calling his disciples to think about their actions.

"Restorative practice forced us to dig deep into the essence of our humanity," Thompson says. "It is allowing each party involved to arrive at some level of peace."

McClendon's passion for restorative practices emerged from painful experience. In 1999, when he was Southeast Michigan director for Prison Fellowship, he saw the approach used with two youths who had severely beaten McClendon's own father. The process gave his father a voice and helped the boys own what they had done. He remembers thinking, Why isn't this an option for everybody?

The Detroit native later linked up with Ted Wachtel, founder and president of the International Institute for Restorative Practices (IIRP), a Bethlehem, Pa.-based graduate school and training program. McClendon now serves on the IIRP board and is a licensed trainer.

IIRP has trained in schools around the country, including West Philadelphia High School, where restorative practices are credited with greatly reducing suspensions and expulsions. School-based "restorative zones" are being developed to provide training for churches and other community groups.

"If Henry and Alice and some others can keep (the program) going in Detroit, it has a really important role in rebuilding that city," Wachtel says.

That's a tall order for a city where 15 schools are under a statewide authority that oversees failing schools, and whose debt-burdened government recently was put under an emergency manager. Thompson of Black Family Development acknowledges it will take "a cultural shift" including courts, police, and service agencies.

"We have a long ways to go," Thompson says. "But we are beginning to impact the community's will for something different to occur."

At Plymouth Educational Center, a K-12 charter school of 1,340 students, every staff member from teachers to bus drivers has been trained in restorative practices over three years. In the same period, the school has seen 90 percent-plus attendance, less problem behavior, and "a huge uptick in kids using the tool," says Superintendent Chris Plum.

"We're seeing more and more of our students coming to us, using restorative language," Plum says.

Case in point: Kristin Woods, director of the 9th Grade Academy, recalls an incident where two students, formerly members of rival gangs, were "at each other's throats." Another student asked to use her office for a restorative circle. By session's end, the boys were laughing together and later became friends.

At her school, circles are held not just to resolve conflicts but convene every morning to air concerns and personal issues. The discussions give students a chance to talk directly with each other and hear how their actions affect others. Sometimes students come to tears when they hear classmates' stories, Woods says.

The core philosophy is developing community around personal relationships, where rules are not just issued from above but talked through with students, Plum says.

"It's not, 'I'm the law throwing thunderbolts at you.' We're in this together. How can we, together, make a commitment and hold each other accountable?"

A committed Christian, Evans works for safe neighborhoods and gang resistance as part of the city's youth violence prevention program. She holds restorative circles for troubled families and for teens involved in gangs or destructive behavior.

She begins her sessions with students by telling her own story of abuse in a broken home, a testimony designed to open them up as well.

"It helps break down the barriers they perceive from one another," Evans says. "Usually conflict is based on the pain or hurt they have in their own lives. . . . Restorative practices helps them realize what really causes that pain, and deal with it."

Evans challenges students to envision futures they may have given up on. She asks: Is your future in prison or on a "in memory of" T-shirt? Or is it using your leadership skills for the good of others?

She's worked intensively with Terry Wallace, who was affiliated with a neighborhood gang but is now making As and headed to Michigan State University. He's a senior at Cody Academy of Public Leadership, a high school in northwest Detroit.

"It made me want to go further with my life, to do something that nobody else that I know did," Wallace says. "And pull a couple other people up, so they can see there's more than we see every day. There's a way out."

At the nearby Don Bosco Hall's Community Resource Center, director Lynn Burdell uses restorative techniques with a girls mentoring group. It's especially effective with youth "on the edge" of doing right or wrong, she says.

"You get to hear and you have to listen, which is a real challenge for many of them," Burdell says. "They're not accustomed to listening and hearing how somebody feels."

She sees potential for the practices to help restore the surrounding Cody Rouge Neighorhood. Young people are being trained as "urban peace ambassadors," and other agencies, businesses, and churches are learning the practices.

McClendon hopes to see the restorative mindset flowing from schools into churches, social services, and the criminal justice system. He sees "a huge amount of openness" to the approach given the magnitude of Detroit's problems.

He traces those problems from Adam and Eve, with their shame and self-destructive behavior, all the way to a Detroit man who killed another guy over a piece of chicken.

"For Christians, we have to do this," McClendon says. "I don't want another guy in the grave because of a piece of chicken."

Charles Honey is the religion columnist for The Grand Rapids Press/MLive.com. He writes at Soulmailing.com and tweets at @myhoneyworld. He wrote for This Is Our City about the EACH church-unity movement.