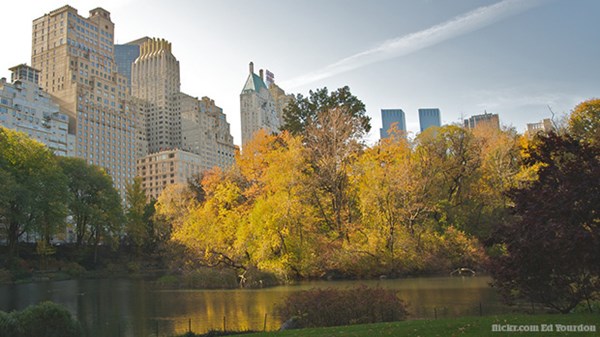 And why more Christians are needed in urban planning.
Howard Freeman

You are sitting with friends on a plaid blanket in a field. You've all brought drinks and food, creating quite the banquet for yourselves. You make sure to look over the maples and dogwoods encircling the field to see the rectangle of large buildings, famously called "twice as high as the Great Wall of China" by the park's designer 150 years ago. Instead of sirens and bus exhaust, you hear the violins and cellos of the New York Philharmonic Orchestra.

And you didn't even have to buy a ticket.

For many of us New Yorkers, Central Park is our shared backyard, a place where we sleep and read, play sports, and (illegally) barbecue. (But who'll tell the cops?) Residents and visitors alike have found in it an urban paradise that we couldn't imagine living without.

That word—paradise—comes from an Old Persian term for places that are "positive, harmonious and timeless." From pairi + diz, it means a "walled enclosure" or garden. As humans, perhaps especially as Christians, we are drawn to the idea of a walled garden, a sheltered escape from our daily lives and an invitation to renewal. Creating shared paradises like this, though, is a vocation that few Christians study or pursue. If they do, their pursuit takes place behind the scenes.

Central Park almost never happened. In 1811, when New York's commissioners established the grid design now considered a standard weave among city fabrics, the park wasn't included in the original plan for Manhattan Island. But surveyor John Randel Jr. eventually included the current Central Park to enable "the buying, selling and improving of real estate." When you are surrounded by water and have a cultural infrastructure that attracts elite professionals and artists, your greatest economic engine is the sale and resale of land. Parks, then, become an impediment to maximizing ROI.

In 1853, the city used eminent domain to acquire the 843 acres that is now Central Park, designed by Frederick Law Olmstead and Calvert Vaux. The citizens who created the park did so from the comfort of salons. They wanted it to be a venue where socialites could be seen, as well as where the poor could breathe clean air and not "lift the bottle."

The socialites' decision has benefited not only those whose nearby real estate values have skyrocketed (as Olmstead predicted). It has also created a paradise for New Yorkers of all classes who can walk there as well as those a 45-minute subway ride away. A more recent example of the symbiotic relationship between park and real estate is The High Line, which has generated more than $2 billion of private investment in the surrounding neighborhood and, as expected, has increased tax revenue for the city. (In my trips to this park, though, I have seen only one homeless person. It has frequent and excellent programming for area schools serving underprivileged children, but through no fault of its own, it is a raised refuge for the "comfortable middle" and upper classes.)

Historically, churches have helped create and maintain public spaces. In New York, these churches included wealthy landowners such as Trinity Church Wall Street, and political powerhouses such as Abyssinian Baptist Church. Both New York churches have enough clout to own public spaces or influence how they are used. In Trinity Church's recent history, space was at the heart of a disagreement with Occupy Wall Street over the use of an adjacent lot. Abyssinian, having spawned its own community development corporation, still wields power over land use, recently initiating partnerships with the likes of a local Starbucks (increasingly the international and ubiquitous public space). Now, this NYC Starbucks is sharing a portion of its profits with the historic black church.

Individual Christians in New York City outnumber churches there by at least a few thousand. Yet it's much rarer to encounter Christian men and women seeking a profession in urban planning or public "placemaking." One such Christian is Jonathan Keller.

"I fell in love with the city when I was 5," says Keller, a city planner who attends Redeemer Presbyterian Church (led by his father). "After 9/11, in particular, I wanted to make the city better." His undergrad studies in sociology led to graduate work in urban planning, where he learned that the built environment directly affects human flourishing. "There's no 'formula' for design," he says. "It's always done in context. If the community itself is already engaged, they can design it, but if not, then sometimes an agency can provide the design. But this is done always after delving into a community's structure."

His favorite public place in the city?

"Astoria, Queens. 30th Avenue and 29th Street." Also known as the Park at Athens Square, the spot features a central court with amphitheater and sculpture, a play area, and seating along the perimeter.

Sometimes a public space offers humans something more fundamental than flourishing. At the historic Bowery Mission, it's new life. Matt Krivich created a "public space" for the community of 80 men who live at the Bowery Mission, which has provided "help and hope to the homeless and impoverished in New York for 130 years."

Having grown up around farmers, Krivich decided that since the men were sneaking up to the sixth-story roof for cigarette breaks, he'd give them a better reason to go up there. With help from the Pratt Institute and Greensulate, which designed sub-irrigating planters, and a $30,000 grant from United Way, the 1,000-square-foot farm now produces fresh eggplant, kale, collards, broccoli, leeks, and heirloom tomatoes, as well as edible flowers that keep away hungry birds. No longer off-limits, the roof is now a scenic paradise for meditation, productive work, and fellowship.

"Just as we saw potential in this bare roof, we see potential in every man who walks through our doors," Krivich says. And just as The Bowery Mission makes space for men who have fallen on hard times, pastor Taylor Field of Graffiti Church on East 7th Street reminds me that the Hebrew word for salvation can translate as "make space for."

With the chance to make space for broken lives by creating paradises, why aren't more Christians working in city planning, creating community gardens, or even simply helping to improve their streets?

"Public space is so riddled with the issue of power," says Mai Hariu-Powell. Hariu-Powell lives near the newly constructed East River Waterfront Esplanade project. She is former chief of staff of the Downtown Alliance, a group that serves the local Business Improvement District (BID), a quasi-government organization funded in large part by the private sector.

"It is so politically charged that there are lobbyists on projects that are urban planning in nature."

To work within this structure, Christians often must find common ground with other groups. Manhattan Together, a group of about 30 Protestant and Catholic clergy, rabbis, and imams, is one example. They lobby on behalf of initiatives that impact their communities, which are often marginalized and have power only when working in aggregate. They have taken interest in a potential public space—the proposed Lowline underneath Delancey Street. If built, the Lowline will become the world's first underground park, providing green space to the least-green neighborhood in NYC. And it could provide an alternate way to traverse Delancey Street, which sees multiple pedestrian injuries and fatalities each year from cars traveling on the Williamsburg Bridge.

For NYC Christians wanting to go ahead and get their hands dirty, there are many ways to do so. The Central Park Conservancy and New York Restoration Project have volunteer opportunities. The parks and playgrounds near your apartment also probably have annual clean-up efforts. You can call 311 and request to borrow tools and materials from the Parks Department to beautify your street. There are always block associations and, for those who don't mind raucous, 4-hour weeknight meetings, Community Board. If you are the entrepreneurial type and want to initiate your own project, here are Manhattan's maps of underserved and well-served areas in terms of open space, listed by Community Board. And anyone living in a city or town with public spaces should not overlook Project for Public Spaces, or ioby, a new micro-financing platform for neighborhood green projects.

Why engage in creating or beautifying public spaces?

As Cassim Shepard, editor of the Architectural League's Urban Omnibus magazine, puts it, "It's a tangible way to be involved in something civic where you can see the fruits of your labor and find fellowship with people you don't know."