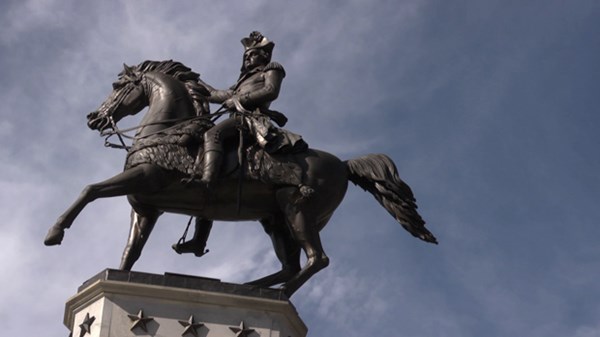 In the past four years of economic upheaval, the Tea Party and Occupy Wall Street have been the defining political movements of the Right and the Left, respectively. This Is Our City's documentary film profiling two Christians in the movements examines the right-left divide among biblically committed Christians through this parallel divide in the civic sphere.

Emmett Bailey of Richmond, Virginia, and Pam Hogeweide of Portland, Oregon, are immediately likeable folk—and not just because we see them serving generous quantities of food in dining rooms, though that helps. They both profess Christ and want to bring what they understand of his teachings to the sphere of political responsibility.

The film's title, "With Liberty or Justice for All," sets liberty and justice against each other. Emmett, the Tea Party Republican, sees justice in terms of liberty (though he does not mention justice), and understands liberty as "all that's good about life, all that's good about being a Christian"—which, at first glance, seems to imply that the gospel is about enjoyment and freedoms in this life alone. Pam, the Portland Occupier, sees justice as the fruit of revival—a return to life sent by God—which is presumably a state of liberty (which she does not mention but surely implies). Though we see her marching for justice, "the language of God," she does not indicate what she believes justice to be. The "99 percent" language of the Occupy movement suggests that it might have something to do with economic leveling.

Pam speaks expansively only when she describes the time she realized that the revival in the church for which she had been praying might actually come outside the church, when non-Christians hunger for justice. This is a strikingly political notion of revival and thus of the gospel. As she presents it, revival is something non-Christians are capable of experiencing while remaining strangers to Christ.

Perhaps these descriptions do not faithfully or fully represent Emmett's and Pam's views—we can only discern so much from snippets of interviews. But taken on their own, the views they express here sound like civil religion on the Right and the social gospel on the Left—the besetting sins of Christians at each of these poles.

The one statement of substantive political thinking in the film comes from Emmett, and I think it is profound. He describes a healthy political order as one made up of largely self-regulating citizens. "The Founders' vision was, and because God's vision was, that we would be … regulated from within. In other words, we're self-regulated. In other words, when God is being honored, people regulate themselves, not being regulated from the outside with laws." In language more reminiscent of the nation's Founders, men are least in need of masters when they can master themselves.

Biblically speaking, we find the prophets Jeremiah and Ezekiel stating this idea when they foretell the fulfillment of Christ's redemptive work in the New Covenant. At that time, people will no longer need instruction from without, but instead will know from within what is right and act on it faithfully (Jer. 31:34). "I will put my Spirit within you and cause you to walk in my statutes and be careful to obey my rules" (Ezek. 36:27). Of course, that's an eschatological picture, one of our complete liberation from sin after Christ's return. But such pictures indicate what we should aspire to embody now.

In other words, what God desires for a politically healthy nation with a strong Christian influence is not a society top-heavy with complicated laws and omnipresent bureaucracy, but a society of decent people who need few laws because their character largely suffices as law and who demand few government services because they serve each other. Bailey suggests that our government would be more faithful to our God and to our Founders if it would protect this character in the people against corrosive economic, cultural, and political influences, and promote it where it was lacking.

If I were looking for a helpful point to take away from the film, that would have to be it. Whether Emmett and Pam could agree on this, I have my doubts. They are more likely to enjoy a good feast together. But that's a good place to start.

D. C. Innes is associate professor of politics at The King's College in New York City, and coauthor with Lisa Sharon Harper of Left, Right and Christ: Evangelical Faith in Politics (Russell Media). Look for Harper's response to the film tomorrow at ThisIsOurCity.org.

A Hermit and Roger McKinney, it looks like this discussion is headed no where. Feel free to continue in another place but at this point I think it's gone far enough away from the original article that we'll delete further comments in this discussion.

Hermit, you’re engaging in psychological projecting. I respond to all of your points. You ignore most of mine. No one in the US claims to be a socialist any more, but your characterizations of capitalism and you ideas are all pure socialist. In past posts I have defined socialism and communism; you just don’t read them. Jesus endorsed free market capitalism when he endorsed the Torah, from which the Church’s scholars at Salamanca determined that the only just market is a free market. You don’t need money to have capitalism. Capitalism can include barter.

The military may have purchased the first electronic computer, but the principles behind it go back centuries. It was based on mechanical computers. The military always purchases cutting edge technology. So what? That doesn’t mean that without military spending the technology would never develop. The steam engine was far more important to Western development than the computer and the military had nothing to do with it. The computer would have been invented regardless of what the military or the government did. All you can say about military spending is that it might have speeded up the process. The transistor made modern computing possible and Bell Labs, a private company developed it.

Hermit, I don’t believe any of the things you attribute to me. Making those claims just proves once again that you don’t read my posts. You just regurgitate your socialist ideas. Yes, God gave us free markets. Study the Scholars of Salamanca. Free market capitalism is in the New and Old Testaments. The Church did not give us communal ownership of property. That’s a dishonest reading of scripture. Sharing private property is not anything at all like common ownership. Christ said to make your primary goal in life to please God. He did not condemn providing for your family and saving for hard times, which is capitalism. Capitalism did not invent greed; mankind did. Greed is far older than capitalism.

Hermit, current demand and supply also take into account what individual actors think the future price will be, too. If individuals thought that oil would run out next year they would price it much higher today. The current price tells us that most people don't think oil will run out in our lifetimes. The market reflects the opinions of the majority of buyers/sellers. I'm sorry they don't agree with you or have your values. I'm sure you would love to dictate to the market what prices should be, but then we wouldn't have a market. We would have socialism. If you think oil should be priced higher, I'm sure producers will allow you to pay more. But just because the majority of people don't agree with your ideas doesn't mean the market is failing or is wrong.