A Mysterious (and Beautiful) Tapestry

Step softly through a meadow, carefully probe the edges of a pond, venture into a desert or explore a nearby wood, and be treated to something that transcends normal understanding. For each is an example of a complex arrangement called an ecosystem.

Despite all we may know about it scientifically, every ecosystem on earth remains a profound mystery. Each is a three-dimensional, full-color illustration of a glorious truth found in Scripture: “Oh, the depth of the riches both of the wisdom and knowledge of God! How unsearchable are his judgments and unfathamable his ways!” (Rom. 11:33, NASB). At the same time, an ecosystem is a beautiful reflection of the mysterious nature of the Trinity.

The term ecosystem was coined by the English botanist A. G. Tansley in 1935. Tansley believed an ecosystem consisted of special relationships between several species of plants and animals—in relative harmony with one another—within a certain geographic area.

The science of ecology investigates these relationships as well as the effects of the environment on plants and animals. These physical (abiotic) influences include temperature, sunshine, precipitation, soil and water conditions, geology and topography, and the pull of the moon. For instance, the ability of a particular species of plant to thrive depends upon climate and length of growing season. An obvious example is the palm tree: it does well in the tropics where there is abundant sunshine, but will not survive in Canada or Siberia because of the cold weather and insufficient sunlight.

Some scientists also like to say plants and animals coexist in an ecosystem. In reality, organisms cannot simply coexist— they are critical to one another. They are woven together into a dynamic, living tapestry.

Why are ecosystems so special? Even if we were to disregarded God’s hand in creating plants and animals (each amazingly intricate), we cannot begin to account for the incomprehensibly complex ways creatures interact within ecosystems. Think of an individual species of plant or animal as a single strand of colored thread. Human reason cannot begin to fathom how the countless “threads” of an ecosystem came to be woven together in such a precise way to produce the stunning tapestry of beauty and form that we see in the world around us.

If all the plankton in the ocean suddenly disappeared, the ocean would die

Contrary to Charles Darwin’s idea that there is inherent “selfishness” built into each species—creating an “every man for himself” struggle in the natural world—God’s creation actually reveals a mutual dependency of organisms. This is especially true of symbiosis— when two creatures help each other.

Every organism in an ecosystem is dependent upon the other plants and animals within that ecosystem for its survival.

For example, if it were possible for us to remove all the pond cypress trees from the Okefenokee Swamp in southern Georgia (this was attempted between 1891 and 1927), it would cease to be the Okefenokee Swamp. The pond cypress (Taxodium ascendens) is considered a keystone species of this ecosystem. And the health of this unique ecosystem depends on this tree. Similarly, if all the plankton in the ocean suddenly disappeared, the ocean would die.

Ecosystems make me think of our triune God. The idea of God’s triune nature being alluded to in creation is not a new one. Sixteen hundred years ago, St. Augustine taught that the beauty of God was rooted in the harmony of the Father, Son, and Spirit within the blessed Trinity. He also saw “the wonders of creation as having their source in the perfect beauty of the Creator.” St. Gregory of Nyssa—a contemporary of Augustine—also believed that the beauties of the natural realm “reflect the splendor of the triune God.”

The early American pastor Jonathan Edwards was convinced that the love within the Trinity (1 John 4:8) is “the foundation and fountain of all being and all beauty . . . of whom, and through whom, and to whom is all being and perfection” (see Rom. 11:36).

Lest we become too simplistic, we should remember the take of the early 20th–century Dutch theologian Herman Bavinck, whom one author summarized in this way: “The Trinity is wholly unlike anything else, but everything else is like the Trinity.” In drawing analogies between God and creation, we should remember that creation reflects imperfectly something of the nature of its Creator.

When I look at ecosystems, I see “unity in diversity” and “diversity in unity.” Take a coral reef. It includes an amazing variety of life, all interdependent. Sponges provide shelter for fish, shrimps, and crabs. The tentacles of anemones give refuge for clownfish and their eggs. Byrozoans, microscopic invertebrates, help cement the reef structure. And we haven’t even begun to speak of the role of flatworms, sea stars, sea urchins, lobsters, squids, parrotfish, and hundreds of other species, who create the astounding diversity in a coral reef, and yet exist in a unified system that makes it possible for each to live.

Richard of St. Victor, a 12th-century monk, pictured the Godhead as a giving and receiving between the three divine persons. Taking it a step further, he said that each person of the Trinity feasts upon the love, beauty, and joy of the other two persons.

When it comes to ecosystems, take the example of an eagle capturing and consuming a rabbit: it’s a type of this giving and receiving. Admittedly, the rabbit does not willingly “give” itself to the eagle—after all, it doesn’t want to be eaten! (Neither does the heavenly Father “consume” his Son, of course—all analogies are limited.) But the eagle receives the rabbit as food, and in turn gives back upon its own death. The eagle’s body decomposes and the soil then receives much needed minerals and nutrients, which in turn are used again by plants, which also feed rabbits.

When God “looked over all he had made, and he saw that it was very good!” (Gen. 1:31, NLT), I assume he had ecosystems in mind. Ecosystems are a delight in and of themselves, because they are an unfathomable arrangement between diverse species that allow them all to thrive together. But ecosystems are also a delight because, like so many other aspects of creation, they point to the “mutual love and life and activity” of the Trinity.

Rick Destree is director of His Creation. This article was excerpted from “The Glorious Nature of the Trinity” in Creator magazine. 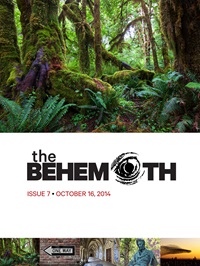