Who can understand the nature of the fowls of the air? How some have with them a voice of melody; and others have their wings enriched with all manner of painting; and others soaring on high, stay motionless in the midst of the sky, as the hawk. ... But if thou canst not read the mystery of birds when soaring on high, how wouldst thou read the Maker of all things?

When it comes to comparing the abilities of birds and people, it’s easy to accept there are some ways in which our fellow creatures outperform us. We cannot fly, for one thing, and we are not as good as birds are at travelling accurately for a long time in a particular direction, while birds routinely migrate vast distances without any kind of help. We find it easy enough to appreciate that birds are superior in the sensory department: they see more crisply, have more of an ultraviolet component to their vision, and some, such as owls, also have extraordinary powers of hearing. As it happens, they also have a magnetic sensitivity that we probably lack. Birds are endowed with many physical gifts.

However, when you sit down to have coffee in the kitchen and idly watch the comings and goings of the birds at your feeders, would you be surprised to know that some of your garden companions might actually out-perform you in a more cerebral function? A variety of studies on the cognitive abilities of tits and chickadees suggest that this is indeed the case. It seems that some bird table residents have, compared to us, a superior spatial memory.

Species such as black-capped chickadees (Poecile atricapillus) are mainly vegetarian in the winter, subsisting primarily on seeds and nuts. There are two characteristics of these plant products that make them unusual in respect to other kinds of food. For one thing, they do not spoil quickly. Many have hard cases that are adapted to protect the seed inside from decomposing, giving them the longest possible time to be discovered by a dispersing animal. Another ecologically important aspect of seeds is that they are produced in vast quantities at only one season of the year, at least in the colder, temperate parts of the world, and that is during the autumn. The first characteristic makes it possible to store them, and the second characteristic makes it highly advantageous to store them.

In the autumn, therefore, and also during the winter when they are foraging from artificial feeding stations, black-capped chickadees don’t necessarily eat everything they find. Instead they will carry food items away and hide them in all kinds of different places, including clumps of lichen, moss, soft ground (even snow), dry leaves, crevices in tree trunks, and behind loose bark. During the summer they will also store some animal matter, including dead spiders, although only for brief periods, but overwhelmingly it is nuts and seeds that are secreted away. These items are, remarkably, stored singly, just one seed per hiding place. It would be disastrous for a bird to put many items into a single cache; if that site was discovered and emptied, it would ruin hours of effort. By scatter-hoarding in this way, the chickadee insures itself against theft.

There are two reasons why an individual might store food away. The first is to cement its claim to the food items. The bird feeder is a busy place, and it might well pay an individual to pick up a seed and take it right away from the public arena, so to speak, so that it can eat it later, when things have died down and it is less likely to be disturbed or robbed. However, another reason why chickadees might cache food is to build up reserves of food that they can tap into at a later date. This could be invaluable as winter progresses and the external seed supply is expected to diminish (it doesn’t at bird feeders, of course, although it would in the natural environment). If an individual has a hoard of food hidden away, this should buffer the owner against any severe conditions that make daily feeding difficult or impossible.

However, a food cache is only any use to a bird if it can be retrieved later, and that requires certain conditions to be met. Firstly, the scatter-hoarding bird must be resident in the same territory over a long period of time; it cannot be wandering around the woods, far from its caches, and it does not want trespassers in its territory either. Black-capped chickadees meet this condition, being long-term and often lifelong residents in the same piece of wood or backyard. The second condition has profound implications. If scatter hoarding is to be of any value, the bird must be able to remember where it has put its bounty.

In fact, there are various ways in which a bird could give itself a chance at recovering the caches. It could simply search in places where there is a high chance that it will run into them again, randomly, or use a particular searching method that should lead it to the right places. It could even mark the cache sites. However, experiments on captive black-capped chickadees in the laboratory have shown that the birds do work from memory. For example, scientist David Sherry and his co-workers provided several chickadees with potential storing sites in 70 holes drilled in an aviary. Once they had lodged four or five seeds away the birds were removed, the aviary was cleaned, the seeds were all taken away, and the handful of storage sites were covered by flaps, making them look different. Despite this, when the chickadees were put back in the aviary, they spent 10 times longer looking in the sites they had used previously compared to ones they had never used. This strongly suggests that they were working from spatial memory.

Several further studies have revealed even more extraordinary details about the chickadees’ feats of memory. It turns out that not only do they remember their cache sites, they also remember the locations of any seeds or nuts that they encounter while foraging but do not pick up. Astonishingly, they only use a cache-site once, and they can remember the sites for at least a month, and almost certainly for much longer.

All of this would not be so remarkable if chickadees only used a few sites, but they don’t. They use a lot, depending on where they live—birds breeding in the far north of the continent use more than their southern relatives. They definitely use hundreds, because they may store 100 or more items in a single day. They might use thousands—a close relative in Eurasia, the willow tit (Poecile montanus), is thought to store away half a million seeds a year. This species apparently remembers where 90 percent of its caches are stored, and the black-capped chickadee is likely to approach this.

How do the birds achieve such feats of memory? It just so happens that their hippocampus, the part of the brain associated in humans with spatial memory, is comparatively larger than it is in similar species that do not store food.

Therefore, if you ever find yourself in that annoying everyday situation where you have misplaced a letter, some item of stationary, your car keys, or some other necessary item, look out of the window at the bird feeders. Birds there, including black-capped chickadees, may be better able to find what they need than you are.

Epigraph added by The Behemoth’s editors. 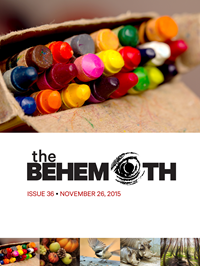