My New Life as a Chimera

The day I received my cancer diagnosis was harrowing. But what followed—learning that the only possible remedy was a risky bone marrow transplant—was even more distressing.

Months after the transplant was completed, I learned from a medical blog that I had become a chimera. Totally unfamiliar with the term, I soon discovered that its first usage, in Homer’s Iliad, described a hybrid monster with a lion’s head, a goat’s body, and a serpent’s tail.

Over time, the definition softened (thankfully) to include mermaids, centaurs and other beings with incongruent parts. Today, the word is used in two primary ways, both benign.

First, it describes animals that possess two sets of DNA—their own and that of their non-identical twin.

Second, scientists employ the concept to describe bone marrow transplant patients who have received life-saving cells from another person. That’s me. Like chimeric cats, we each possess two distinct sets of DNA.

My cancer is relatively rare. Sometime last year, my bones began to produce an increasing number of mutant white cells. If untreated, it would gradually shut my immune system down, much like AIDS does. I would then die, not of the cancer itself, but of a simple common cold.

But then a medical miracle occurred. My brother, Grant, was identified as an identical genetic match. His bone marrow was transfused and my life was spared.

Months afterward, I asked my doctor about my new chimeric identity. With Grant’s DNA now in place, would I suddenly begin to imitate his love of dancing (I’m a horrible dancer)? Would I share his disdain for chocolate (perish the thought)? Would my sense of humor deviate to match his (I won’t comment on who is funnier)?

The doctor smiled and then gave a binary response. He said that if he were to take a swab from the inside of my cheek, the DNA would still be my own. But if he took a blood test, it would no longer be my birth type but Grant’s. Learning of this new reality, one of my adult daughters asked (with a wink): “Are you still my dad?”

Over the past several months, I’ve pondered the use of my new dual identity as a metaphor for the Christian life. In doing so, I’ve come to a startling conclusion: Every believer is chimeric.

In Ephesians 4, Paul writes: “put off your old self, which is being corrupted by its deceitful desires. Put on the new self, created to be like God in true righteousness and holiness.”

While his language to “put on” and “put off” refers to changing one’s clothes, I take a degree of license to read it more literally, as changing of one’s genes—the internal code that makes each of us unique.

If bone marrow transplants had existed in his day, Paul might very well have employed it as his preferred metaphor. A transplant is much more graphic than changing one’s clothes in describing the radical change that faith brings to one’s identity and character. It recasts the very core of one’s being from the inside out.

Paul exhorts us to shed our “old self” which is “corrupted.” In my battle with bone cancer, my rogue cells had to die—to be “put off”—in order for life to continue.

In a similar manner, our corrupted fallen nature is killing us. Elsewhere, Paul refers to it as a “body of death” that makes us “wretched,” “ hostile to God,” “slaves to sin” and “by nature children of wrath.”

Theologian Reinhold Niebuhr once quipped that “original sin is the only empirically verifiable doctrine of the Christian faith.” It is such an ugly tenet that most of us prefer to ignore it.

But its expression through our daily attitudes and behaviors cannot be denied. Not only have we inherited the warped spiritual DNA of our first ancestor, but we compound the problem with our own vices and misdeeds.

Bone cancer is an apt image of original sin because both are so destructive, detestable and deadly. And both must be dealt with aggressively in order for good health to flourish.

At the moment my body reached its lowest point after chemo and radiation, the doctors transfused my brother’s life-giving blood cells into me. For the next month, as I was kept alive by a cocktail of pills, my wife and I waited anxiously to learn if his cells were grafting. When we finally received word that they were multiplying by the billions, we shed tears of gratitude.

The second part of Paul’s admonition in Ephesians 4, to “put on the new self, created to be like God in true righteousness and holiness,” should move us to adoration.

My medical story is replete with spiritual parallels. To cite the old Baptist hymn, I’ve literally been saved by the blood. As the beneficiary of my brother’s cells, I am now much more keenly attuned to Jesus’ gracious gift of redemption on the Cross. Surely, as we are told in Leviticus, “Life is in the blood.” Never again will I experience Communion or Easter in the same way.

Likewise, I have a much deeper appreciation of the new spiritual nature I received at conversion. Through grace, divine DNA was transplanted into my soul. Phrases like “being born again,” “becoming a new creation,” “conforming to the image of the Son,” and “being changed into his likeness” all now speak to me in a fresh way about the miracle of regeneration.

And I’m intensely grateful that Jesus attacked the ravages of original sin head-on. By becoming a “second Adam,” his new spiritual DNA superseded that transmitted by our first ancestor. Paul puts it succinctly: “For if, by the trespass of the one man [Adam], death reigned through that one man, how much more will those who receive God’s abundant provision of grace and of the gift of righteousness reign in life through the one man, Jesus Christ!” (Rom. 5:17)

While I hate to compare myself to Adam and my brother to Jesus (after all, we were sibling rivals growing up), the analogy works. My cells were sick and dying; Grant’s were healthy and life-giving. Reversing the story of Cain and Abel, my elder brother gave me life. In like manner, Jesus redeems and gives us hope.

Every Christian is a spiritual chimera. Within each of us simultaneously resides both the new nature of Jesus and the old nature of Adam. As Martin Luther aptly observed, “Both will continue in us our whole life long.”

I wish I could claim that all of my cancerous cells are gone. But, even post-transplant, some live on, continuing to wage a civil war within me. Accordingly, my doctors are ever vigilant to monitor the sinister presence of these bad cells in order to take appropriate medical action.

Just so, even after we come to faith, the effects of our old nature continue to linger. This is the basic message of Ephesians 4: though redeemed, we must continuously “put off” (present tense) the old self and its vices. As with my cancerous cells, regression is quite possible. That’s why Paul goes on to exhort his readers not to commit sins such as dishonesty, anger, greed, and sensuality.

Though we possess new natures, our old DNA continues to clamor for attention. Like chimeric transplant patients, each of us must take both affirmative steps (practice spiritual disciplines) and negative precautions (avoid unholy choices). Our new identities, while initiated at conversion, must be cultivated with life-long intentionality.

The good news is that after we die, our souls (and bodies) will be purged of all such mutations. This restoration will go far beyond the innocence experienced in the Garden of Eden. We will, rather, be conformed into the very image of Christ himself.

Alec Hill left the presidency of InterVarsity Christian Fellowship in 2015, following his myelodysplasia diagnosis. He recently returned in a new role as president emeritus. He is a board member of Christianity Today. 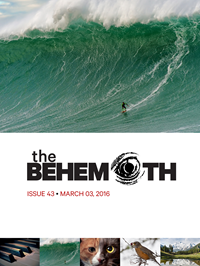