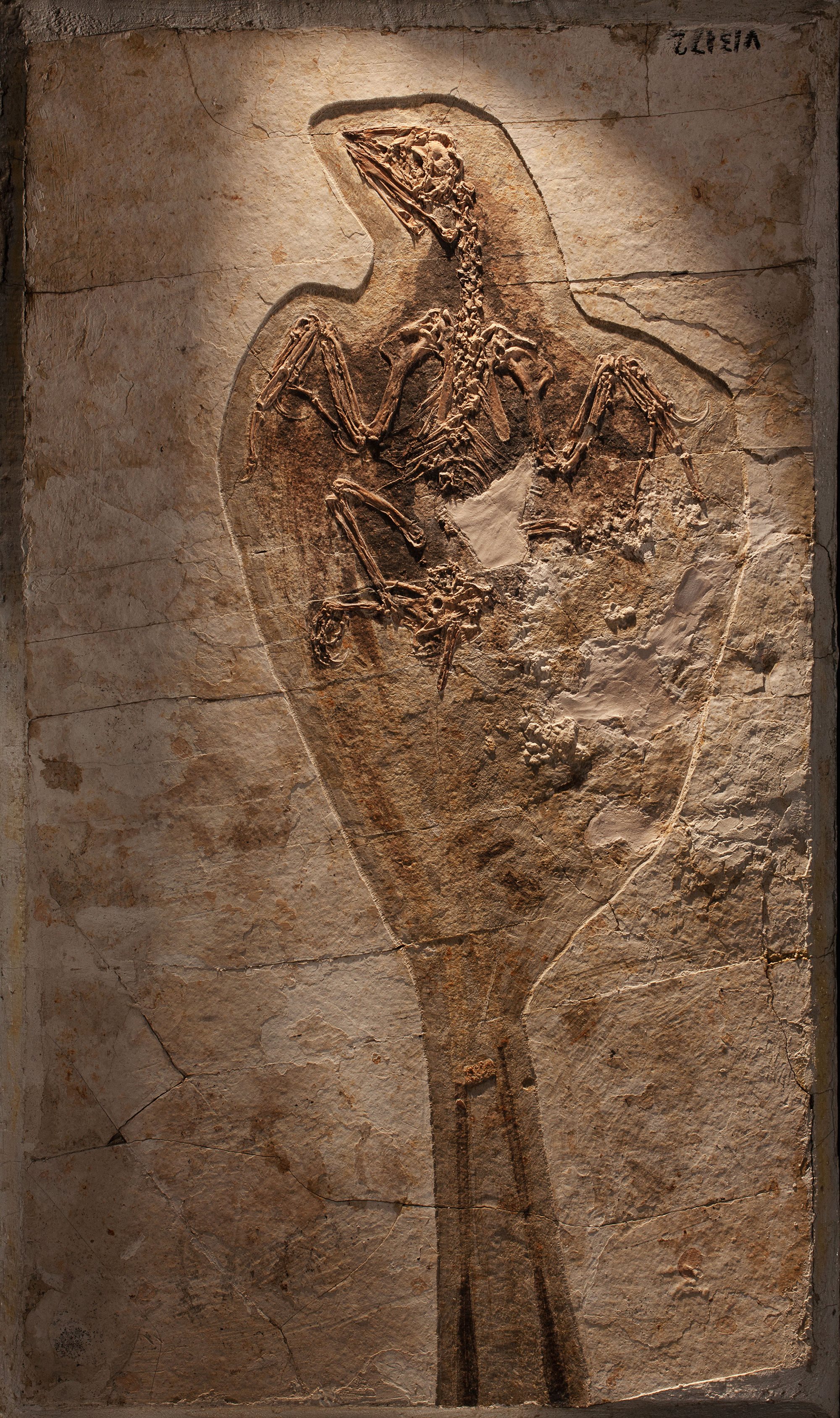 Feathers comfort. Not only does plumage insulate from cold and rain, but birds can pluck feathers out to line their nests and insulate their eggs and hatchlings as well. Feathers allow flight. They camouflage. They warn. Some birds (most notably grebes) even swallow their feathers and feed them to their young, apparently to help with the digestion of fish bones.

Feathers also beckon. While bright colors, ornamental shapes, and tricks of movement may have a primary use of attracting an avian mate, they have drawn us humans as well. A feather on the ground is a nearly irresistible draw, an alluring gift from above. “You don’t know where it’s been” is both the hygienic mother’s warning and the inquisitive child’s wonderment.

Photographer Robert Clark was one of those children, wandering western Kansas in search of plumes and quills. A longtime National Geographic photographer, he says he became especially interested in birds while shooting for a 2004 cover story on Charles Darwin, then dove deep for a 2011 article on feathers. Five years, thousands of feathers, and hundreds of photographs later, Clark has just published Feathers: Displays of Brilliant Plumage (Chronicle Books). Here is a short excerpt. 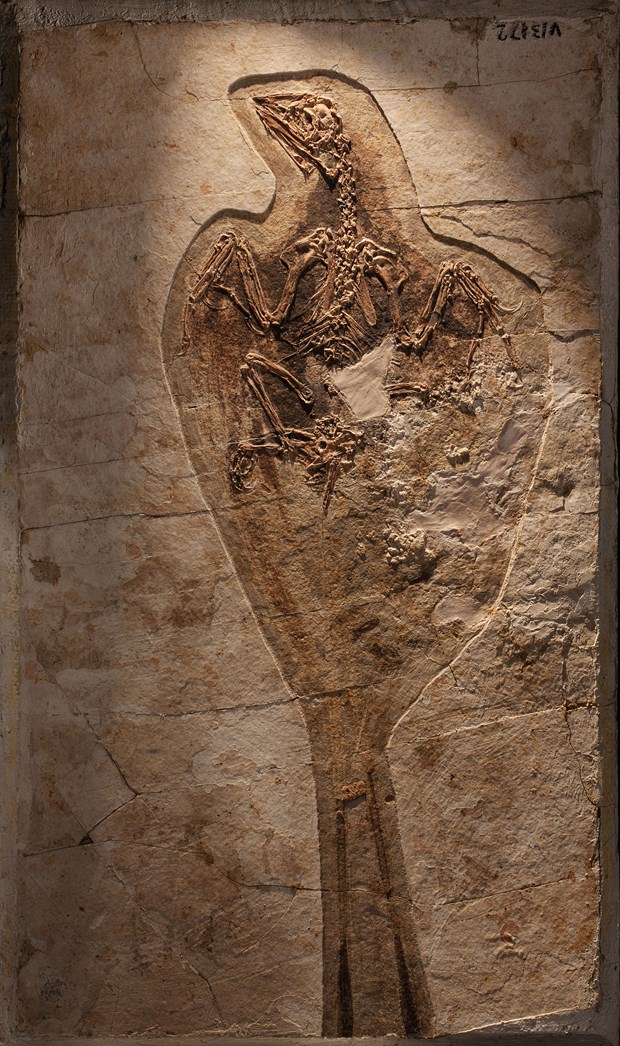 This Aves variation, discovered in the Liaoning province of China, shows a member of Confuciusornithiformes, a group of bird predecessors all identified by talons evident on their forelimbs. Named after the Chinese philosopher Confucius, these animals are the oldest known birds to have beaks. This shot of the Confuciusornis species reveals how reptilian their structure remained even as they developed much longer and complex feathers. 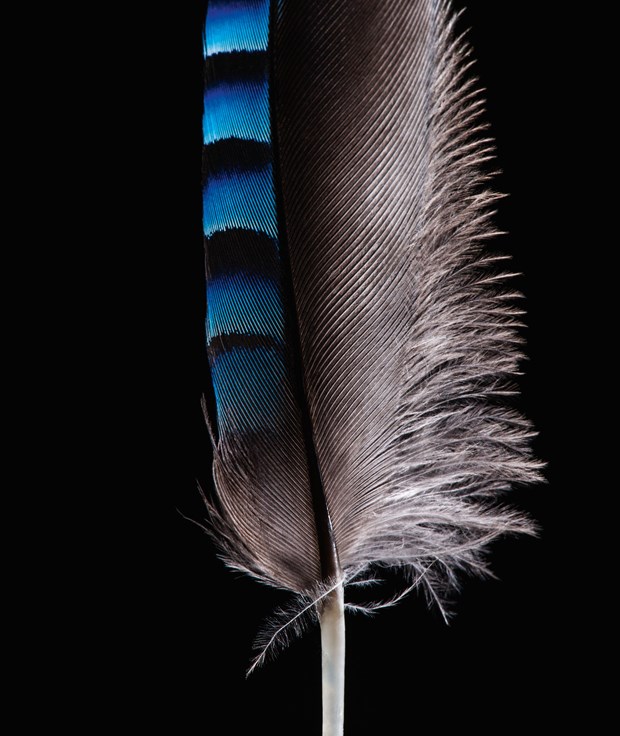 The Eurasian Jay is far less colorful than its American counterpart, the Blue Jay, though they are just as noisy and inquisitive in nature. The flight range of the Eurasian Jay is much wider than that of the American Blue Jay, extending from India to the United Kingdom. 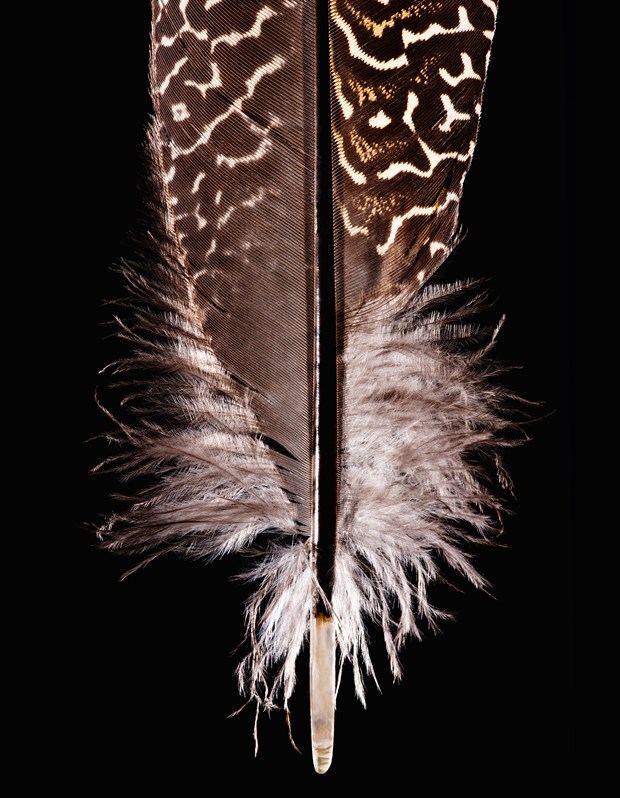 At first glance, the Great Argus may appear to be a quiet-foraging, pheasant-like bird from the Phasianidae family—until mating season. The wing feathers are the crown jewel of the Argus’s plumage. In an elaborate mating dance, the male Argus fans its wings toward the female, creating a conical display of spots. Large eye-like spots known as ocelli cover the primary and secondary wing feather groups. Some evolutionary biologists believe that the ocelli are meant to resemble seeds. The male with the most seeds might appear the most sexually viable, and therefore win over the female as a mate.

This photo is close-up of a feather from a female bird. The females are smaller with duller coloring and fewer ocelli. 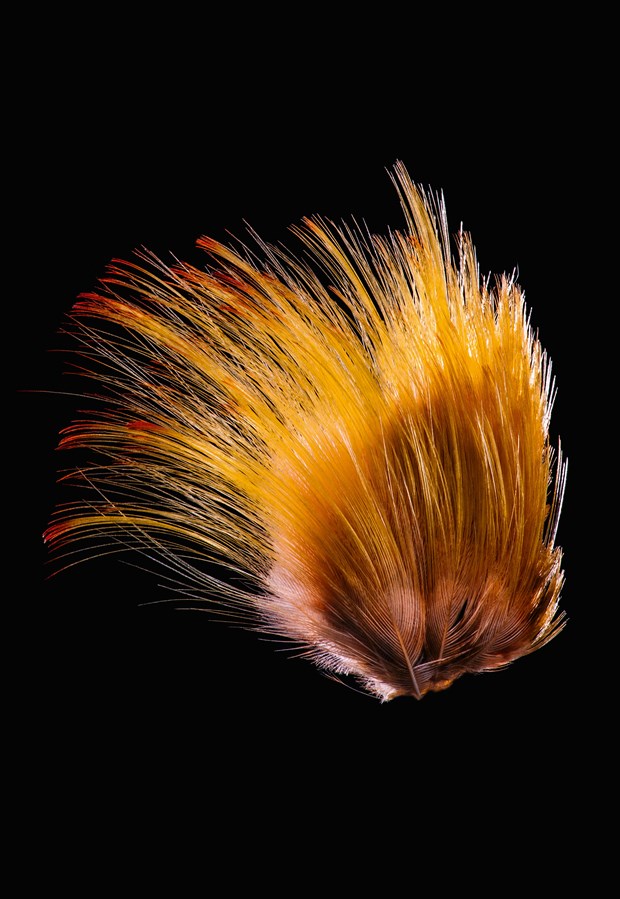 The male Golden Pheasant—also known as the Chinese Pheasant—is an extravagant creature. Featuring reds and yellows, every section of their plumage is a vibrant color. But despite the male bird’s showy appearance, it is not as visible as one might assume in its dark, coniferous-forested habitat in Central China. The layered distribution of the bird’s feathers obscures the less colorful bases of the crest feathers.

This detailed view of a contour feather from the top of the bird’s head provides a closer look at the plumage that gives the Golden Pheasant its name. These ornamental feathers lack barbules, which means the barbs of the feathers can lie at any angle, giving the crest its explosive appearance. 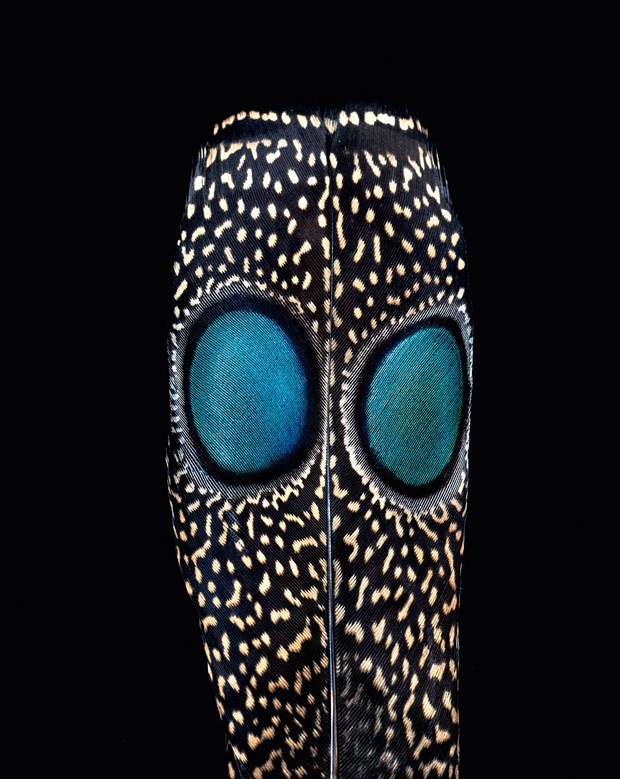 The largest of the Asiatic Pheasants, the Grey Peacock-Pheasant sports tail feathers dotted with ocelli—round markings that look like an eye—that appear to change color in different light. During the male bird’s mating dance, he directs his colorful feathers toward the intended female. 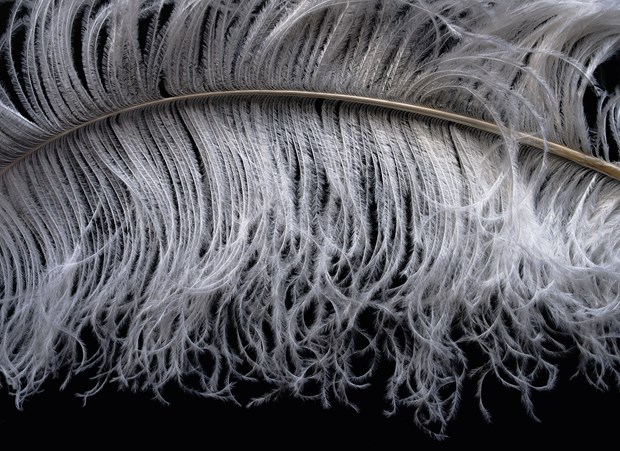 Also known as the Camel Bird, the Ostrich has one of the largest ranging distances of a terrestrial bird. The birds’ powerful appendages allow them to reach speeds of 41 miles per hour. Their otherwise useless feathers can be used to adjust for balance while the bird is running. 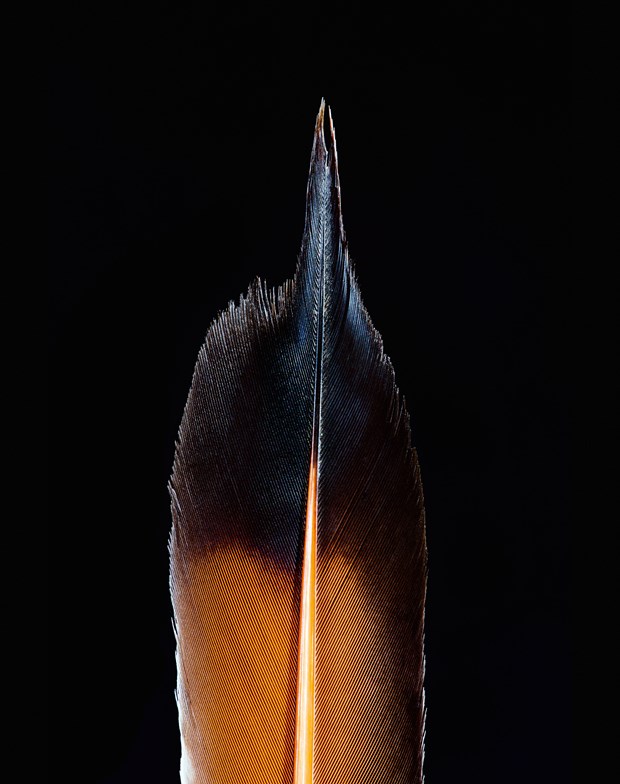 A varietal of the common Woodpecker, the Red-shafted Flicker’s feathers have developed to suit its environment. The notched margins of this bird’s wings serve two purposes: the feathers allow for quick, articulate flight, and the stiff rachis—the feather’s central shaft—allows the bird to hold itself against a tree as it burrows deep into the bark to find a quarry of small insects. 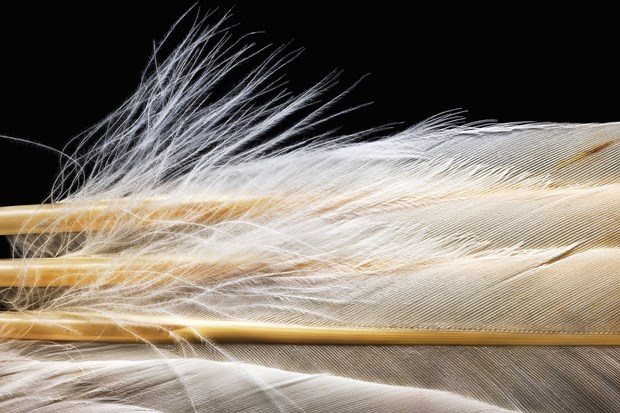 The Lesser Snow Goose is a far-migrating member of the Anserini tribe of White geese. Their name, caerulescens, comes from a “blue” (cerulean) plumage morph through which they molt each year. The bird’s high-altitude slotted wing allows the goose to fly long distances with high efficiency without too much cost in energy.

This photo offers a detailed view of the calamus—the bottom portion of a feather’s shaft—on the powerful wings of a Lesser Snow Goose. 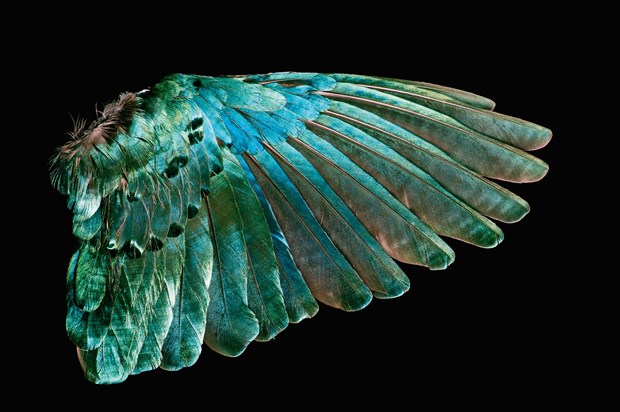 The Superb Starling’s wing feathers are a bright, eye-catching green indicative of a structural coloration; color is produced by microscopically structured surfaces that interfere with and scatter visible light. These iridescent birds live in large flocks where females interbreed with multiple males for larger genetic diversity, while the males pair with a single female for life. 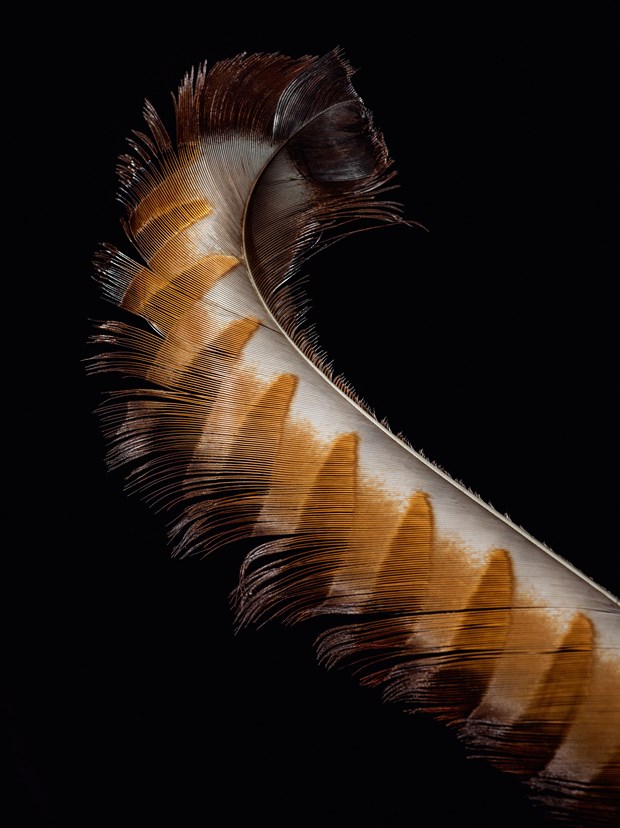 Found in the forests of Australia, this species is known for the male’s ability to mimic sounds from their environment, ranging from complex birdsong to the sound of a chainsaw being used in the woods. The male Lyrebird’s feathers, which resemble a lyre when fanned out, are crucial to their courtship.

The mating rituals of a Lyrebird are just as complex as their birdsong. The male birds build a mound of topsoil on which they sing and fan out their feathers in a grand dance to attract a mate.

Robert Clark (@RobertClarkFoto) is a freelance photographer based in New York City.

Photos and captions excerpted with permission from Feathers: Displays of Brilliant Plumage by Robert Clark, published by Chronicle Books in 2016. 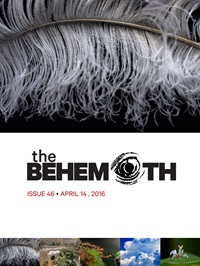