Explore
A Layman and His Faith

L. Nelson BellOctober 11, 1963
This article is from the October 11 1963 issue. Subscribers can read all of CT's digital archives.

The pacifism which was rampant following World War II is not dead, although it is not so openly or vigorously espoused as it was during those days when in colleges, church papers, and retreats young people were requested to sign papers expressing their unwillingness to engage in war for any reason whatsoever.

The events leading up to our participation in the last shooting wars caused many ardent pacifists to reverse their thinking, and to admit openly that they had done so.

But now, with the growing emphasis on humanitarianism, often substituted for or confused with Christianity, there is quiet but growing renewal of propaganda for pacifism, a movement which only too often distorts history and brings forth arguments as fallacious as those of the 1930s.

Present-day pacifism does not stem from any one source, but the ultimate effect is the same. The theologies of many pacifists are as far apart as belief and disbelief can be, but the aims are for all practical purposes identical.

Techniques include using the opportunity afforded by young people’s gatherings to present the claims of the pacifistic approach, only too often in a way to take full advantage of the ignorance, idealism, and unpreparedness of those indoctrinated.

The writer has within a space of ten days come into direct contact with two types of extreme pacifism, the one based on an essentially non-Christian philosophy, humanitarian at best, and the other centered in interpretations of Scripture where the matter of the Christian conscience predominates.

There are wide differences of reasoning between the pacifism of the theological liberal and that of the evangelical Christian, but the effects on the individual are alarmingly similar.

For four hundred years the Mennonites, ... 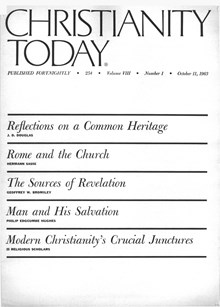 This article is from the October 11, 1963 print issue. Subscribe to continue reading.