September 29, 1967
This article is from the September 29 1967 issue. Subscribers can read all of CT's digital archives.

Evangelicals at the Brink of Crisis: Significance of the World Congress on Evangelism, by Carl F. H. Henry (Word, 1967, 120 pp., $1.75), is reviewed by Gerald Kennedy, bishop of the Los Angeles Area, The Methodist Church, Los Angeles, California.

A high-school student in an English class was surprised to learn he had been talking prose all his life without knowing it. After reading this book I concluded that I am more of an evangelical Christian than I knew because there is so much here with which I agree completely.

Let me say right away about this volume that not only will it bring comfort to those within the evangelical fold; its pointed criticism should also force an honest reaction from those outside it. Indeed, for all who have uncritically assumed that everything ecumenical has to be good, this book should be required reading. Dr. Henry points out in the introduction that Time magazine “emphasized the controversial Bishop James A. Pike above the events in the Berlin Kongresshalle from October the 25th to November the 4th, 1966,” though the worldwide scope of this World Congress on Evangelism made it significant.

After the introduction, which includes the congress declaration, Henry speaks about “Evangelicals and the Theological Crisis.” He maintains the continued centrality of the Bible and the secondary position of tradition, taking issue with the Roman Catholic brethren on this point. His implication is always that there are some things that ought not to be compromised in the name of unity. He denies universal salvation while insisting upon the universality of the Christian religion. He is aware of the theological weakness of evangelicals and pleads for a new and stronger emphasis ... 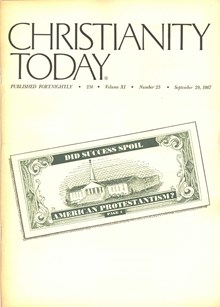 This article is from the September 29, 1967 print issue. Subscribe to continue reading.