By Timothy C. Morgan, with Robert Nowell and David Virtue reporting from Canterbury, England.September 7, 1998
This article is from the September 7 1998 issue. Subscribers can read all of CT's digital archives.

The campaign by liberal bishops for the ordination and marriage of practicing homosexuals suffered a striking setback in August at the historic Lambeth Conference in Canterbury, England.

Anglican bishops from around the globe voted 526 to 70 with 45 abstentions for a resolution declaring that homosexual practice is "incompatible with Scripture." During the past year, several other major Protestant church bodies have issued statements either rejecting ordination and marriage for practicing homosexuals or affirming that sexual relations should be limited to heterosexual marriage.

Archbishop of Canterbury George Carey said, "I stand wholeheartedly with traditional Anglican orthodoxy. I see no room in Holy Scripture or the entire Christian tradition for any sexual activity outside matrimony of husband and wife."

INFLUENTIAL RESOLUTION: Once a decade, the bishops of the world's 55 million Anglicans, known in the United States as Episcopalians, gather for the Lambeth Conference, held this time at the University of Kent in Canterbury. The meetings are advisory in nature and nonbinding, but are nevertheless highly influential.

The debate over the place of sexually active homosexuals overshadowed much of the three-week-long conference's agenda. Early on, a controversial meeting between the Lambeth sexuality study group and homosexuals was canceled. Bishop John Spong of New Jersey, a leading advocate for homosexuals, was put on the defensive when he called African Christians "superstitious" and backward in their views on sexuality.

The bishops' sexuality study committee was drawn into intense exchanges as they drafted a compromise resolution. But two days later during a plenary session, bishops approved conservative amendments to the committee's ...

Join in on Facebook
Tags:
None
Issue:
September 7 1998, Vol. 42, No. 10, Pg 32
More From:
By Timothy C. Morgan, with Robert Nowell and David Virtue reporting from Canterbury, England. 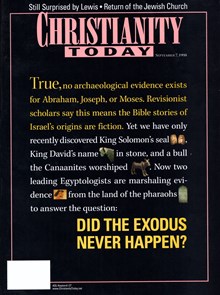 This article is from the September 7, 1998 print issue. Subscribe to continue reading.