"Deaths, promotions, and other tidbits from the religion world."
November 1, 2003

• PAUL HILL, convicted of the 1994 murders of a doctor and a volunteer escort at a Pensacola, Florida, abortion clinic, was executed in Florida on September 3 by lethal injection. Hill, 49, did not file an appeal. Prolife leaders unanimously repudiated Hill's violence. "Paul Hill did our cause no favors," Joseph Scheidler of the Pro-Life Action League told The Christian Science Monitor. "You don't kill abortionists. You try to convert them peacefully."

• WILBUR E. NELSON, 92, who in 1944 founded a nationally syndicated radio ministry, The Morning Chapel Hour, died August 22 in Laguna Woods, California, after five weeks of hospitalization for a variety of ailments. The ministry, now called Compassion Radio, continues under the leadership of his son, Norman Nelson.

• KENNETH B. MULHOLLAND, longtime missions professor at Columbia International University and former missionary to Central America under the United Church Board for World Ministries, died September 8. Mulholland, 65, had battled cancer for the last two years.

BILL McCARTNEY, founder and president of Promise Keepers, resigned October 1. McCartney had been on a board-approved leave of absence since March 1 to care for his wife, Lyndi, who has a severe respiratory illness. PK named VP THOMAS FORTSON, JR. as his successor.

• On August 28 SAMUEL KOBIA of the Methodist Church in Kenya became the first African to be elected general secretary of the World Council of Churches. Kobia succeeds German Konrad Raiser, who held the position for 11 years.

On September 17, the Canadian House of Commons approved a bill, C-250, adding "sexual orientation" to the protected groups in the hate propaganda section of the Criminal Code. "Canadians who are speaking out against the redefinition of marriage are already being accused of 'hate' speech by homosexual activists," said Brian Rushfeldt, executive director of the Canada Family Action Coalition, in The Vancouver Sun. Rushfeldt expressed concern that under C-250, "the activists will begin to insist on prosecution to silence their critics with criminal sanctions." Under the law, promoting hatred is punishable by up to five years in prison. C-250 now goes to the Senate.

The 11th U.S. Circuit Court of Appeals ruled September 12 that Focus on the Family's lawsuit against the Pinellas Suncoast Transit Authority must go forward. In 2000, Focus tried to place ads in PSTA bus shelters in Pinellas County, Florida. The ads promoted a "Love Won Out" conference that sought to prevent homosexuality in youth. But PSTA rejected the ads. Focus claimed its free-speech rights had been violated and sued in federal court. The PSTA said the First Amendment did not apply because a private contractor—Eller Media, which managed psta's ad space—had excluded the ads. The 11th Circuit rejected that argument on appeal, noting that the psta's contract with Eller said some subject matter could be banned. "Had we lost this case, it would have given the government a green light to get around the Constitution," said Matthew Staver of Liberty Counsel, which represents Focus. The PSTA could simply contract with private parties, he said, and direct them to censor speech. The circuit court remanded the case to district court.

A motion reaffirming marriage as being between a man and a woman failed 137-132 in Canada's House of Commons on September 16. "The vote is a reflection of the deep division in Parliament and in Canadian society on this issue," said the Evangelical Fellowship of Canada's Janet Epp Buckingham. "It is a positive step to see debate on this issue finally beginning in the House of Commons." Prime Minister Jean Chrétien announced in June that the government would allow homosexual marriage to become legal across Canada.

In September a court in India's Orissa state found 13 Hindu extremists guilty of murdering Australian missionary Graham Staines and his two sons. On January 23, 1999, a mob in the village of Manoharpur set fire to the vehicle in which Staines, 57, and his two sons (Philip, 10, and Timothy, 8) were sleeping.

"Justice is delayed, but it is not denied," said Theodore Williams. He is former president of the World Evangelical Fellowship and now a prominent pastor in India's 23 million-member Christian community.

Singh has a loyal band of supporters among extremist Hindus. Singh will appeal the conviction.

The Staines family says it opposes the death penalty for the murderers. Widow Gladys Staines continues to carry on her husband's work with leprosy patients.

"I have said earlier and say now that I have forgiven the killers because Christianity teaches against bitterness," she told CT. "If we don't forgive, then we allow bitterness to come into our own lives."

The Lausanne Consultation on Jewish Evangelism reaffirmed the necessity of faith in Jesus as God incarnate at a meeting in Helsinki, August 7-12. The statement, "Helsinki 2003: Jesus and His People," also affirmed love between Jewish and Arab followers of Jesus and acknowledged the need to address the humanitarian needs of Jewish people. Said Kai Kjær-Hansen, international coordinator of the LCJE, "If Jesus is not the Messiah of the Jewish people, how can he possibly be the Messiah for the rest of us?" The statement is available at www.lcje.net/papers/2003/helsinki.doc.

Police in Eritrea are continuing a countrywide crackdown against evangelicals. Authorities arrested 12 mostly young, independent Christians meeting for worship in a private house in the capital of Asmara on September 7. All are members of the Dubre Bethel Church in Asmara. After holding the 12 for nine days at Asmara's Police Station No. 5, the police chief demanded that they deny their faith to be released. When the six women and six men refused, he ordered that their food rations be withheld.

On August 19 and 20, police locked 57 young people in metal containers for having Bibles with them during their summer military camp at Sawa. At least 230 independent Christians in Eritrea are currently jailed for their faith. The government recognizes only four "official" religious affiliations: Orthodox Christian (claimed by 40 percent of the population); Muslim (50 percent); Catholic (5 percent); and Evangelical Christian (2 percent). 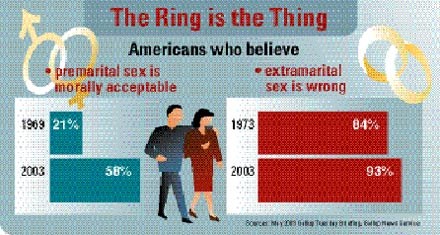 The Ring is the Thing

Christianity Today has followed the arrest and conviction of the murderers of Graham Staines:

'Once You Forgive, There Will Be Healing' | How a martyr's widow turned her life around and won India's prestigious Gandhi harmony award. (January 31, 2003)

The Promise Keepers web site has a press release announcing their new president.

The Evangelical Fellowship of Canada has followed the Bill C-250 in Ottawa.

The Ring is the Thing