In the spirit of our first annual Readers' Choice Awards, we decided to weigh in on the best artists of the year. So rounding out our year-end coverage are four more short lists. Best Female and Male Vocalist are awarded for specific talent, based on an artist's album and/or concert performance in the year 2003. Best Solo Artist is given to any one person who exemplified any combination of songwriting, performance, conduct, and impact. Best Band or Group similarly looks at the whole package for any artist consisting of two or more members.

Listen to this versatile young woman sing (or speak for that matter) and try to remember that she's still in her late teens. One track she's bopping like a tween pop idol, the next she's croon-rocking like Gwen Stefani. Her real strength, however, is heard during the soulful R&B songs. And she's not just preaching to the choir; Orrico also had tremendous success in the mainstream market in '03.

Unquestionably one of our day's finest vocalists. She nails it again with a live recording that's electrifying and soul stirring from beginning to end—exactly what you'd hope for from such a talent on such an album. There's nothing studio manipulated in this performance, and yes, Mullen's "Redeemer" is still as moving as it ever was.

Out of the Grey's more vocal half has long been considered one of the finest voices in Christian pop. In 2003, Denté gave one of her most tender performances yet with her solo debut, Becoming. Unfortunately, it's going mostly ignored. Trust us—this is good adult contemporary from a gifted singer/songwriter.

They say absence makes the heart grow fonder. It ... 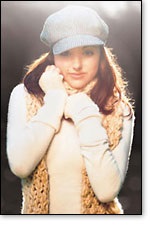