Can Christians and horror movies co-exist in the same cineplex? Better yet, is the horror genre even redeemable? The author thinks so—but only if certain conditions are met.
by W. David O. Taylor|April 5, 2005

I believe in demons.

I believe in supernatural horror as much as I believe in the reliability of my Merrell shoes.

But what I believe is not the same thing as what I like or do not like.

What I do not like is watching horror films at night—or the day—or at any other time. Not Se7en. Not The Ring. Not Poltergeist—at all. I just can't. I tried watching Halloween in high school and I almost died of fright. I couldn't handle the images. I took them too literally. How could I not? People I knew as a child had been harassed by honest-to-God demons. Of two things I was certain in my youth: 1) I did not like horror movies, and 2) Christians did not watch horror movies, not for stylistic reasons but for the theological conviction that we should not. It was verboten.

Migrating to the suburbs of Chicago as a teenager, I discovered a culture of teenagers who watched and loved horror movies. But why? I couldn't understand. What was the fascination? What need did they satisfy? A good laugh? A good scare? Did they not know that these scary things really did exist—on the other side of the veil—with Wormwood and Lucifer in tow?

A Bonanza of Horror

Twenty-some years later, I'm driving down to my local Blockbuster and there, I buy a one-month pass. With it, and despite ... 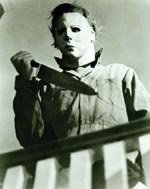