Between the Spy Kids and El Mariachi franchises—to say nothing of his work on the original From Dusk Till Dawn—Robert Rodriguez has been making live-action cartoons for so long, it was probably only a matter of time before he made a live-action comic book.

Sin City is based on a series of graphic novels (from Dark Horse Comics) written and drawn by Frank Miller, and it is difficult to imagine a director better suited to Miller's pulpy, anarchistic style than Rodriguez. Miller may work on more mainstream titles from time to time—recent comic-book movies like Elektra (based on a character created by Miller) and the upcoming Batman Begins (inspired, in part, by Miller's classic Batman: Year One storyline) definitely bear his imprint—but the independently produced Sin City arguably captures Miller's sleazy, sadomasochistic cynicism in its purest form. There is a wildness, a craziness, to Miller's stories that bleeds—no, sprays—off the page, and whatever else we might say about this film, Rodriguez does capture that element very well.

Although this movie makes good use of the sax-heavy music and world-weary narration that are common in film noir, Rodriguez's mostly black-and-white visuals are influenced more by Miller's original comics than by any cinematic conventions. The blood—and there is a lot of blood here—is given the red spot-color treatment on some occasions, while on others it looks like bird droppings, a patch of white against someone's black coat. In at least one scene, someone stands against a brick wall and, in the shadow, we see not simply a darker version of the rest of the wall, but more of a reverse image—dark bricks with white lines between them. And the city ... 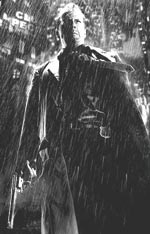