Anna Popplewell, who plays Susan in the upcoming Narnia movie, fell in love with Aslan when she first met him as a 7-year-old bookworm. But those mice at the Stone Table? Now that's a different story.
by Mark Moring |August 2, 2005

Sixteen-year-old Anna Popplewell is, in many ways, the perfect choice to play Susan, the older Pevensie sister in Disney's upcoming film adaptation of The Lion, the Witch, and the Wardrobe. Like the Susan of C. S. Lewis's beloved Chronicles of Narnia, Anna actually is an older sister, she's studious, she's pragmatic and logical—and thus an unlikely candidate to fall for such a far-fetched fairy tale. But like Susan, once she meets Aslan face-to-face, all of that pragmatism and skepticism falls aside, and she embraces the magic.

But for Anna, there was one little problem: Mice. In the story, when the great lion Aslan is killed, he is bound by ropes to a huge slab called the Stone Table. Before his resurrection, tiny mice come to his rescue, gnawing away at the ropes to set him free. When it came time to shoot that scene for the movie, Anna freaked out: She's terrified of mice.

In this interview, which Anna granted to us via telephone from her London home, we learn how she ultimately dealt with the little critters, what she thinks of the Narnia books, how she perceives Susan's character, what she makes of Aslan, and other thoughts on the movie, which arrives in theaters December 9. This will be the first of many exclusive stories about the film at Christianity Today Movies, so keep watching for more coverage in the months ahead.

The movie isn't done yet, but are you happy with the way things are turning out?

Anna Popplewell: Yeah. I saw a couple of scenes when we were shooting, some roughly cut scenes, and then recently I just finished doing post-production. And it all looks really good. It's obviously really nice to see the animation too [added later via computer graphics]. But I'm really looking forward to seeing the whole ... 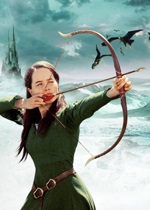