There have been a number of books written about U2 and their iconic frontman, Bono, arguably the world's most famous rock star. But not till now has Bono himself come out to tell his own story. In the new book, Bono: In Conversation with Michka Assayas (Riverhead Books), the rocker shares his thoughts on numerous topics with a French music journalist and friend who has been with the band virtually since the beginning. In a series of honest conversations presented in Q&A format, Bono discusses, among other things, his upbringing (including the death of his mother when he was a teen and the ensuing rocky relationship with his father, who died just a few years ago), U2's beginnings, his bandmates, his marriage, fatherhood, his passion for social action, the effects of celebrity, and, fittingly, his faith and how it intersects all of the above.

The following exchange between Bono and Assayas took place just days after the Madrid train bombings in March 2004, an act of terrorism that left 191 dead and more than 1,800 wounded. The two men were discussing how terrorism is often carried out in the name of religion when Bono turned the conversation to Christianity, expressing his preference for God's grace over "karma," offering an articulate apologetic for the deity of Christ, and giving a clear presentation of the gospel message.

Bono: My understanding of the Scriptures has been made simple by the person of Christ. Christ teaches that God is love. What does that mean? What it means for me: a study of the life of Christ. Love here describes itself as a child born in straw poverty, the most vulnerable situation of all, without honor. I don't let my religious world get too complicated. I just kind of go: Well, I think I know what God ... 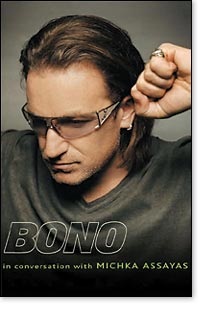