Things seem to be looking up for Dick Harper (Jim Carrey) and his wife Jane (Téa Leoni). While they don't have the snazzy voice-activated car that their neighbor has, they do have a big house, a huge widescreen TV, and a considerable debt load to go with their cushy upper-middle-class lifestyle. And now, to make things even better, Dick has been promoted to vice president of communications at Globodyne, the company where he works. Alas, the corporation giveth and the corporation taketh away, and no sooner have Dick and Jane begun to celebrate their good fortune than Globodyne goes through an Enron-style meltdown, wiping out their income, their pension, and even the property value of their house; if they were to sell it, they would actually owe the bank money. The landscapers even repossess their front lawn. "I didn't know they could do that," Jane says.

Unfortunately for Dick, while at least one of his bosses knew what was coming and cashed his chips accordingly, he himself had no clue, and he happened to be in the middle of an interview on live television when Globodyne's stock took a sudden dive. The public humiliation, and the possibility that he might be indicted along with his former employers, makes it that much more difficult for Dick to find work—prospective employers are more interested in meeting the infamous loser than in hiring him—so eventually he turns to minimum-wage jobs and hangs out with Hispanic day laborers, where, of course, he loses his I.D. and is mistaken for an illegal immigrant when the cops show up. Jane, for her part, takes part in clinical trials for cosmetics that leave her face looking rather puffy.

Desperate times call for desperate measures, and finally, to restore the lifestyle ... 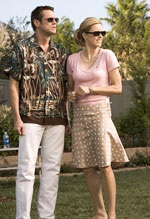