The Adventures of Sharkboy and Lavagirl in 3D could be described as The Matrix meets Spider-Man for eight-year-olds. Like Neo in The Matrix, Max—this movie's protagonist—is caught in a parallel world where his own perceptions dictate what he sees. Sharkboy and Lavagirl, the heroes of Max's imagination, derive from the superhero comic books, where characters like Spidey and the Green Lantern have specific powers and weaknesses (unlike the nearly omnipotent Superman).

Robert Rodriguez, the creator of the upbeat and immensely popular Spy Kids trilogy, is an astonishing creative force. He draws from popular culture and his own imagination for his films, but he can't take all the credit for Sharkboy and Lavagirl. The writing and screenplay credits go instead to Racer Max Rodriguez—Robert's seven-year-old son, who got the idea for Sharkboy while playing with his dad in the swimming pool. "I'm Shark Boy!" Racer Max told his dad, insisting on a movie about a character of the same name.

Rodriguez admits that it is difficult to slip into the mind of an eight-year-old to make a movie that will ring true to a young audience. So he decided to collaborate with his son, suggesting that Racer Max come up with a female counterpart to Sharkboy. The result was Lavagirl, who gives off sparks, heat and flames, especially when she gets riled up.

The Max of the film—named after the younger Rodriguez—is a daydreamer who keeps an illustrated "dream journal" recording the exploits of Sharkboy and Lavagirl. The journal also portrays the imagined versions of his bully-nemesis Linus and his overbearing teacher, Mr. Electricidad, played with scenery-chewing glee by comedian George Lopez. So real to him are Max's dreams, that he presents them in an oral report as reality, earning the derision of his classmates and the scorn of Mr. Electricidad.

Then, on a stormy day when a tornado looms on the horizon, Sharkboy and Lavagirl burst into the classroom and spirit Max away to the planet Drool, where only he can rescue the planet from the evil machinations of Mr. Electric, a half-human, half electro-robotic version of his teacher. The bully Linus also appears, this time as the nefarious villain, Minus. 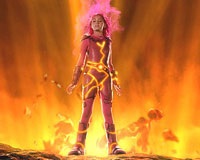 Wonder why they call her 'Lavagirl'?

The imagined world of Planet Drool is playfully and charmingly executed. We are taken on a run across an ice bridge and deposited in the Land of Milk and Cookies, where the young actors float on chocolate chip juggernauts and are harried by whipped cream storms and chocolate swamps. A bone-rattling rollercoaster and other delights make Planet Drool a child's nirvana except for one catch: The evil Mr. Electric, just like his earthly counterpart, Mr. Electricidad, is obsessively focused on crushing dreams. His idealized world is a black hole of despair, and he is aided by Minus, a worse bully on Planet Drool than Linus is back on earth. If they have their way, Planet Drool, like Max's school, will be devoid of imagination and dreams. It's fascism, child-style.

Lopez is a treat—evil in a truly comic way that will thrill but probably not frighten little children. As Sharkboy, Taylor Lautner brings a great deal of physical presence and energy, drawing from his experience in competitive martial arts and hip-hop dancing. Taylor Dooley's Lavagirl is a mix of charm and girl power, and Cayden Boyd, as Max, is an engaging daydreamer, but they come across as great actors in the high school play. That will work fine for Sharkboy and Lavagirl's younger audience, but it detracts a bit for older viewers. David Arquette and Kristin Davis are believable as the quarreling parents who push Max into his dream world, but there is little heat.

Max (Cayden Boyd) joins the heroes on their adventure

Rodriguez captures the way our real-life aspirations and fears are played out in our dreams, and we can't help but be reminded of weird dreams we've had when reality has morphed into unreality. And who among us can deny childhood fantasies wherein we saved the world? Many adult action films center on One Man who can save us from nuclear destruction, government plots, and terrorist attacks. Even as grownups, we're still having that fantasy, identifying with super-versions of ourselves.

The main problem with the 3-D is that it darkens the picture and drains much of the color, leaving a somewhat grim, monochromatic world. Every now and then we are instructed by a flashing subtitle to either remove or replace our 3-D glasses and the difference in color is jarring. It may have been Rodriguez's plan to make the 3-D world of Planet Drool darker to accentuate the dream-crushing gloom that Mr. Electric has imposed, but it takes away from the fun. The 3-D experience includes little characters coming out of the screen and giving the impression that we can reach out and grab them. It does give a depth of field to the dream planet, but the dimming of color may be why 3-D never really caught on, even though it was a promising technology in the '50s.

You don't want to mess with Mr. Electric

The Spy Kids movies were successful due to their demographic-defying popularity. While their target audience was grade school kids, they were also popular with the high school crowd. Parents found that they could enjoy them when they took their young children.

Whether Sharkboy and Lavagirl will capture the same wide audience remains to be seen, though it's a fun summer film for grade school kids. It avoids the subtle meanness and double entendres that filmmakers sometimes insert into films geared to children. The characters are wholesome and the plot is about good overcoming evil without resorting to violence. It's not a great movie, but it's an enjoyable little adventure.

The Adventures of Sharkboy and Lavagirl in 3-D is rated PG for mild action and some rude humor, but mostly it's good clean fun. Very young children may find some scenes a bit frightening.

Hard to believe that the guy responsible for hyper-violent films like El Mariachi, Desperado, and From Dusk Till Dawn would go on to invent the delightful family-friendly franchise called Spy Kids. It was even more disorienting when he directed Sin City, which was so dark, bloody, and violent that even diehard action movie fans found it hard to stomach. Now, Robert Rodriguez is bewildering audiences again with another adventure designed with kids in mind: The Adventures of Sharkboy and Lavagirl in 3D.

David DiCerto (Catholic News Service) says it "imparts a positive message about the importance of fostering creativity." And he notes that "kids will be delighted by the whimsical visuals and wild gadgets. … There are even enough clever sight-gags to keep adults amused." But he also observes that the 3-D spectacles "grow tedious and distract from the genial tale."

Christopher Lyon (Plugged In) isn't impressed with the 3-D feature. "Even the kids may be underwhelmed by the 3-D effects on display. … I was ready to get those glasses off long before the screen told me to." On the other hand, Lyon notes, "The values on display wind up in a mostly positive place."

After sitting through this, mainstream critics wish Rodriguez would go make another Sin City.

from Film Forum, 06/23/05 Andrew Coffin (World) says the movie "isn't nearly as well-conceived or constructed as Mr. Rodriguez' Spy Kids trilogy. The story is somewhat haphazard, the characters not as fully developed, and the 3D technology more of a frustration than an enticement. That said, there are rewards." He credits the film as imaginative, and notes, "Parents will also appreciate the film's final message of forgiveness."

1 of 4
Taylor Lautney as SharkboyWonder why they call her 'Lavagirl'?Max (Cayden Boyd) joins the heroes on their adventureYou don't want to mess with Mr. Electric