As a passenger plane flies over Moscow, a bird is sucked into the turbine. The engine flames up and rattles. A screw falls from the engine mount, plummets through the air and lands on the steel grating of an building's air duct. There, crows peck at it until it wedges through the grate, tumbles through the vents, into a woman's apartment and—plop!—into her coffee.

This inventive and well-shot scene from Russian action thriller Night Watch is impressive and visually stunning. But I don't know why it's in the movie. Is it yet another indicator that this cursed woman is having a really bad day? Does it show the effect of seemingly random events? Is it just a unique scene transition? Or is it there merely because it's cool? 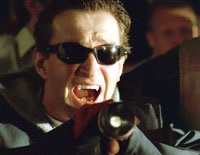 A consistent lack of clarity is the biggest thing working against the imaginative, gritty and frantic Night Watch. Based on the popular Russian book trilogy by Sergey Lukyanenko, this first installment explains the unseen existence of Others, an ancient race of humans with supernatural powers, who are divided into two sides: the Light Others and the Dark Others. The two sides (comprised of Others like witches, vampires, shape-shifters, seers, etc.) have been at war for eons. However, the open warring between the sides ended a thousand years ago when each side's leaders, the Light General Gesser and Dark General Zavulon, created a treaty that gave the night to the Dark forces and the day to the Light forces. They also agreed that no Other can be forced to join a side; he or she must choose a side.

That much of the plot is clear. Other side plots, prophecies and specifics are a bit harder to grasp. For instance, there's something called "the gloom" in Night Watch. Apparently this is an important concept that Lukyanenko's books describe in great detail. But from the movie, I can only tell you: 1) It's another dimension that Others enter to go invisible. 2) It requires blood sacrifices. 3). It can kill. That's all I know. The movie also rattles on a lot about prophecies, cursed virgins, and vortexes. But basically the deal is this: The ancient unseen war is still raging today, and a Chosen One is on his way. His choice to go Light or Dark will tip the scales in the balance of power.

Because the film does not invest much time developing Lukyanenko's concepts—and because the lead character, a Light Other named Anton (Konstantin Khabensky), is about as personable as a wet rag for the first hour—the story often feels more like a sterile parade of events than a captivating tale. In many ways, the movie feels like the complicated first Matrix movie—with all the exposition scenes taken out.

They say Yegor (Dmitry Martynov) has fire in his eyes. Really.

Despite this flaw, Night Watch found box-office smashing popularity in Russia when it released there in 2004. (The second film, Day Watch, has just released in Russia and is even more popular. It releases here later this year.) The films' successes there may owe a great deal to homegrown excitement. And no doubt, the films found a large audience because many Russian viewers already knew the story and didn't need the exposition. But Night Watch does have its merits as an intriguing (if not original) story told with artistic and stylized vision. While often too frenetic, closely shot and MTV cut-happy, the movie has a fascinating tone and imaginative visuals. There are a handful of truly inspiring and vivid scenes that make this feel like Blade crossed with an art house flick. It's fun to see a foreign freshness applied to tired Hollywood genres like action/sci-fi films. And though some of that style gets in the way of story, the film does have interesting perspectives on spiritual matters.

While the film's basic overview seems to suggest spiritual warfare (and perhaps the coming of Christ to change the rules), the allusion breaks down in the details. First of all, The Others are seemingly more comparable to humans than to angels and demons. Like us, The Others are flawed humans with gifts and choice in how to use those talents. It is unfortunate the film did not do more with the spiritual warfare idea of Dark Others persuading humans to sin and Light Others trying to stop it—a theme only depicted in one early scene.

Secondly, the story is not a consistent Christian metaphor. Night Watch does comes closer to depicting the realities of unseen spiritual warfare than lightweight popcorn flicks like Constantine (Keanu Reeves fighting demons with a cross-shaped shotgun). But Night Watch does not present a truly biblical clash between good and evil because of ambiguity about what makes good "good" and bad "bad."

Definitely NOT from the cast of 'Cats'

The Dark Others are said to have sprung from pure evil in the Earth's early days, and the Light Others appeared right after them to create a balance in the world and to stop them from preying on humans. In addition, Light General Gesser seems to be God (although weak and not all knowing) and Dark General Zavulon seems to be Satan. Thus, it seems like Night Watch is suggesting that the Dark ones are meant to be bad, and the Light ones are supposedly good. But the film doesn't draw a clear difference between Light and Dark; there's a very thin line between the two. Both sides are desperate for any power advantage. Both sides put human lives in danger, act savagely, and break the truce.

It's hard to tell if the filmmakers intentionally blurred the line. Because of the movie's complexity, the intended message is lost. The film could be meant to question our ideas of who is good and who is evil. It may just be an epic following popular story archetypes (like Arthurian legend). Or it could even have connections to the Russian-U.S. Cold War.

However, by not applying any real moral value to what makes Light different than Dark, the film implies there is no real value to either—and they are in fact inherently equal. This implication is supported by two story points: 1) The truce originated because Gesser realized both sides were equal and neither side would win, and 2) While the Dark forces are apparently the ones who prey on humans, the Light Others—and Gesser himself—at times seem pretty nonchalant about human lives.

Anton is just a reflection of his former self

As a result of the ambiguity, this is more anthropological study than values-based morality. In fact, being Light or Dark feels like little more than a label. Choosing which side to fight for seems to have about as much to do with morality as does choosing which sports team to root for. And that theme is well taken advantage of in Night Watch. Dark Others often question Light Others why they get to make the rules that govern the Dark Ones—but not the other way around. Light Others often trick Dark Others into breaking laws just to arrest them, and put human lives at risk to do so. At times, you can begin to think of the Dark Others as oppressed freedom fighters viewed as being "bad" or "inferior" when they are really no different than those holding them at bay. In the end, a central question seems to be: Why would someone choose one side over the other?

The film's true worldview on these discussions is not revealed clearly in this installment, and is even complicated by a surprising—but hauntingly understandable—decision by a central character in the thought-provoking climax. It's hard to tell where the series will take these discussions. While the film does keep Light and Dark pretty equal, the conclusion begins to show the deceptiveness and manipulation of the Dark forces. But does that mean the trilogy will be faith affirming? It's hard to tell.

The good news is that the films' created world—and especially the thought-provoking cliff-hanger conclusion—is intriguing enough to build hope that the trilogy's next two parts can make this a reverse Matrix saga: A series that becomes more and more clear and compelling as it goes forward.

Night Watch is rated R for strong violence, disturbing images and language. There's a lot of swearing, many buckets of blood and some gore, and a disturbing sequence of witchcraft. The movie is intense, gritty and graphic. There's also a brief shot of female nudity.

Russia's popular special-effects-fueled fantasy adventure Night Watch has arrived, and critics are either applauding its over-the-top action or condemning its derivative storyline. Christian film critics offer some measured praise to director Timur Bekmambetov's visions of horror and mayhem, but they find something suspicious about the storytellers' portrayal of good versus evil.

David DiCerto (Catholic News Service) calls it "escapist entertainment which allegorically explores questions of good and evil and the nature of free will. … From a Catholic perspective, however, the film's dualistic worldview of good and evil—competing but coequal—is incompatible with the foundational Christian truth of God's supreme goodness and sovereignty."

DiCerto concludes by criticizing the gore and the jumbled plot, but points out that "the seemingly downbeat ending … propels viewers toward part two with the hope that light will ultimately triumph over darkness. During the climax, Anton must face his past sins in a confrontation suffused with pro-life undertones. A surprisingly moral message amid such mayhem."

Night Watch has divided mainstream critics—some find it just another shallow and chaotic fantasy flick along the lines of Underworld, while others find it a cheap but enjoyable thrill ride.

1 of 4
Konstantin Khabensky as Anton, the lead characterThey say Yegor (Dmitry Martynov) has fire in his eyes. Really.Definitely NOT from the cast of 'Cats'Anton is just a reflection of his former self