Artists come and artists go quickly in the music business, and many unfortunately tread the same ground covered by many others before them. But there are other artists who make a strong effort to break out of the rut with music that's more thoughtful and significant. Here are twelve such new artists (in alphabetical order) from 2005.

An exceptionally good band that didn't quite take off in 2005 as hoped, though 4th Avenue Jones still seems destined for success. They can rap with hip-hop's best—Kanye West, GRITS, Common—but think of them more as a skilled band that blends the energetic funk of Earth, Wind and Fire with the modern urban sensibilities of The Roots. There's musicality and talent here, which is especially apparent in their awesome live show. The stage is also where the band's love for God comes across most clearly; their faith is a little more subtle in the lyrics on their albums. But 4th Avenue Jones deserves props for their strong mainstream sensibilities, and thus outreach potential. They are the freshest sound of 2005 in Christian music.

Click here for the original review.
View the artist page.

I Wish We All Could Win (Simple/INO/Epic)

After only two years riding the independent circuit in their home state of Texas, The Afters signed a deal with Simple Records and then landed co-distribution with Epic Records—before their debut even released. They found success on Christian radio with "You" and in the mainstream with "Beautiful Love." The Afters don't seem like a strong crossover candidate with their straightforward pop/rock sound and sometimes overtly spiritual lyrics, but there are hooks aplenty on their catchy debut, and ... 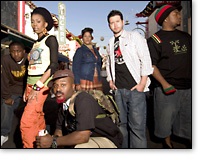