IRAQ: THE WAR AT FOUR

Love Your Muslim as Yourself

We remain woefully ignorant about the world's second-largest religion.
A Christianity Today EditorialMarch 16, 2007
This article is from the April 2007 issue. Subscribers can read all of CT's digital archives.

As U.S. military engagement in Iraq enters its fifth year, at least one thing should be obvious: Our nation remains woefully ignorant about religious and ethnic factions in the Middle East.

One reason is that Middle East conflicts are complex. In a press conference, Secretary of Defense Robert Gates said the violence in Iraq cannot be described as a civil war. "I think that the words civil war oversimplify a very complex situation in Iraq," he said. "I believe that there are essentially four wars going on in Iraq.

"One is Shi'a on Shi'a, principally in the south; second is sectarian conflict, principally in Baghdad, but not solely; third is the insurgency; and fourth is al Qaeda, and al Qaeda is attacking, at times, all of those targets."

And that's just Iraq. Equally complex conflict characterizes Afghanistan, Pakistan, Lebanon, Iran, and, of course, Israel and Palestine. While few would argue that Middle East issues are solely religious, there are strong religious dimensions to which our military and diplomatic efforts must pay attention. Douglas Johnston, president of the International Center for Religion and Diplomacy and author of Religion, the Missing Dimension of Statecraft, said in a presentation to the Department of State, "There were instances early-on in the [Iraq] conflict where modest investments on the religious side could have had significant payoff on the security front, but those investments were not made for fear of running up against the 'establishment clause.' "

Madeleine Albright, former secretary of state under President Clinton, has also lamented our ignorance of the continued importance of religion in world affairs in her book The Mighty and the Almighty.

Love Your Muslim as Yourself

Love Your Muslim as Yourself
expand
hide this 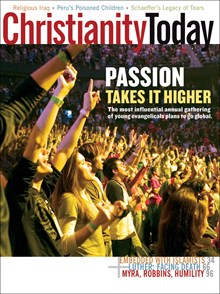 This article is from the April 2007 print issue. Subscribe to continue reading.