God really does judge the nations, new book argues.
Stephen H. WebbAugust 29, 2007
This article is from the August 2007 issue. Subscribers can read all of CT's digital archives.

Was 9/11 God's judgment against America? Pat Robertson and the late Jerry Falwell said so. They blamed God's wrath on abortion and promiscuity, and they were promptly skewered by the media—as much for raising the uncomfortable topic of divine judgment as for using the occasion to deplore America's sexual excesses. In God's Judgments: Interpreting History and the Christian Faith (IVP Academic), Steven J. Keillor argues they had the right idea but the wrong reasons. His new book is a sophisticated defense of their theological instincts.

Keillor turns Robertson's and Falwell's snap judgments into a measured meditation on why God judges the nations. His method is as simple as it is provocative. He first sifts through the tragedy of 9/11, looking for evidence of what the United States had done to anger radical Islamists. He then asks if any of these items might also have angered God: economic greed, immoral cultural exports, and "use of terrorist guerilla units against the Soviets" in Afghanistan.

Keillor's conclusion—that God used terrorists to punish us for national sins—is a theological spin on "blowback," a word the political Left popularized during the aftermath of 9/11. Blowback suggests that America, by abusing its power abroad, got what it deserved.

For Keillor, however, blowback does not happen of its own accord. God, not Osama bin Laden, ultimately was blowing back at America when the terrorists released their whirlwind that tragic day.

The subject of God's intervention among the nations is drawing increasing interest lately, as books such as Can God Intervene? and Divine Justice, Divine Judgment hit the shelves. Treating God as the cause of specific historical events is, of course, taboo among professional ... 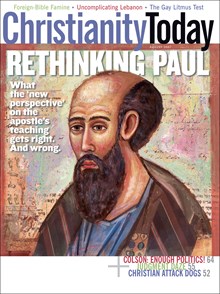 This article is from the August 2007 print issue. Subscribe to continue reading.