First there was Waitress, which starred 30-ish Keri Russell as a married woman who learns that she is bearing the offspring of her neglectful, even abusive, husband; deeply ambivalent about the pregnancy itself, she simply states that she recognizes the child's "right to thrive," and that is that. Then there was Knocked Up, in which Katherine Heigl played a single up-and-coming journalist in her 20s who keeps her baby partly because she is repulsed by her mother's suggestion that she "take care of" the pregnancy now and have a "real baby" at some point in the future. And then there was Bella, in which a struggling single woman ends up with an unplanned pregnancy and intends to abort, only to end up reconsidering after a concerned friend offers to help.

And now, there is Juno, which is arguably the funniest and most meaningful of the lot. The film stars Ellen Page as the youngest mother of them all, a whip-smart high-school student named Juno MacGuff who discovers that she is in the family way after a single sexual experience with her best friend and bandmate, a semi-dorky track star named Paulie Bleeker (Superbad's Michael Cera).

The film's early scenes play on the idea that teenagers these days have become quite casual about sexual matters—Juno's friend Leah (Olivia Thirlby) offers to call the abortion clinic for her, just like she did for one of their friends—but things take an unexpected ... 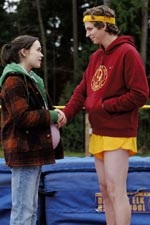