Hillsong Australia's youth band has rapidly become one of the most sought after groups in today's modern worship, but they know to keep ministry the focus of the movement.
Andree Farias|June 18, 2007

The contrast is striking. Hillsong United—the youth arm of the worship pioneers at Hillsong Australia, and one of today's hottest worship groups—is about to play a gig at an olden Victorian church near historic Asbury Park in New Jersey. The cavernous venue is Ocean Grove's Great Auditorium: a majestic, spacious wooden structure built in the 19th century by a group of Methodist ministers. Fans seem unmoved by the sense of awe the place evokes. They swarm the aisles and crowd the pit area, roaring every so often as they wait for the Aussie band to hit the stage. As soon as they do, pandemonium breaks out. Bodies jump, arms go up, and a cacophony of voices fills the sanctuary. The concert has all the makings of a big rock show, and yet United knows it's not about them, but about God. By evening's end, they've got everyone and their mother literally singing his praises, and not the band's. Before and after this intense time of worship, Christian Music Today caught up with band principal Joel Houston to talk about the group's growing ministry.

Considering how overcrowded the American modern worship "scene" has become, your group has managed to grow in popularity. How did you get to this point?

Joel Houston Consistency. Just doing it. We don't even see ourselves as a band as much as part of a movement—I guess maybe even a mouthpiece for that. All of that starts at home, with our church, a local community. Now that we've come to [the States] and united with the people here and all over the Earth, [we're all discovering] that we share the same faith, the same passion, the same heart. What we're doing is fluid. I don't think it's something that we do for five years, and then United becomes dismissed. Ideally, it's ... 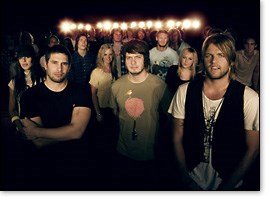