The often powerful and relatable Reign Over Me is about a New York man named Charlie Fineman (Adam Sandler) who lost his wife and three daughters suddenly and tragically. Years later, he has yet to move on. He's stayed in the same home, quit his job and withdrawn into himself. He's shut down emotionally and socially. He won't discuss his family—or seemingly even think of them. He doesn't deal with the past; he ignores it. His life is comprised of listening to music, remodeling his kitchen (over and over), and playing a fantasy video game. He is a sad shell of who he was because of grief, clinical depression, guilt and self-punishment.

When Charlie runs into his college roommate Alan (Don Cheadle), Charlie insists he doesn't remember Alan. He holds his old friend at a distance. Alan can't believe this disconnected and distant man is his old friend. But yet, Alan can't shake the feeling that rebuilding this friendship seems to be the only thing that may help Charlie begin overcoming his grief.

Okay, that much we can tell from the commercials and trailers—but what exactly does the title "Reign Over Me" mean?

When Charlie feels threatened or must keep his mind from wandering to uncomfortable thoughts, he retreats into loud classic rock played over his headphones. One of those songs—played prominently several times in the film—is The Who's "Love, Reign O'er Me" (redone for the film's soundtrack by Pearl Jam). It's obvious that it's not just a random song placement. In fact, the song's title fills in the word missing from the film's name.

What does Charlie need to reign over him? Love.

In telling the story of Alan's steady, bold and abrasive love slowly brightening Charlie's dark world, Reign Over Me hits on ... 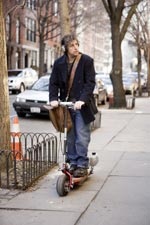