A major metaphor in Frost/Nixon, the fairly straightforward retelling of the 1977 television interviews between David Frost and ex-president Richard Nixon, is the sport of boxing. No punches are thrown. The sport isn't really discussed. But under the glare of the TV cameras, these two men are not merely asking and answering questions, they are juking and jabbing. They evade. They attack. They manipulate. They break from their duel to retreat to their corners for analysis and the clearing of sweat from their handlers. Strategy and mental games are everything for this champion and his challenger.

And like a highly contested bout, the drama simmers with emotion, excitement, and tension. But unlike a boxing match—or the average Hollywood film—Frost/Nixon is able to create this intense drama with very little action. Instead, director Ron Howard uses play-like scenes of two men sitting in chairs to put you on the edge of yours. Somehow, he makes a historical retelling of an interview into fascinating, electric, and dynamic cinema. In fact, the movie's signature powerful moment is a close-up of one man's face. It's a simple shot, but it is explosive.

One reason it feels like a play is it's an adaptation of the successful play of the same name that debuted in London in 2006 and quickly moved to Broadway the next spring. The play was nominated for dozens of theatre honors including three Tony Awards and three separate Best Actor wins for Frank Langella as Nixon. The film captures that winning formula by keeping the play's key actors (Langella as Nixon, Michael Sheen as Frost) and giving screenwriting duties to the original playwright Peter Morgan. But this is not just a filmed play. Instead, Howard brings the story alive with archived footage, a retro-feeling tone, stirring close-ups, great pacing, and a mock-documentary structure that includes one-on-one confessionals of actors talking about the 1977 events as if they were the real-life figures who were there.

I was surprised by just how much of the movie was actual recreation of the well-known Frost/Nixon interviews which ended with the media-shy Nixon giving his first admission of guilt in the Watergate scandal. But the film is more than just a reenactment; it is a mix of fiction and fact that paints a picture of the context in which the interviews happened—all in an attempt to create a portrait of the two men on either side of this historical moment. 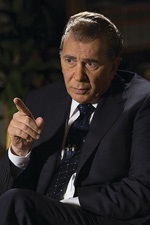 Frost is a charismatic entertainer and lightweight talk-show host who sees an interview with the disgraced president as a ticket to the U.S. success that he craves. (Imagine Ryan Seacrest cornering Tony Blair on his decision to back the U.S. war in Iraq.)  As one character describes him, he's "a man with no political convictions . . . but he was a man with one big advantage over the rest of us [political pundits]: he understood television." What's at stake? Frost knows that these interviews will fail without a Watergate admission.

Nixon, on the other hand, is the historical poster boy for not understanding television nor its impact (see the legendary debates versus JFK). Yet, he is a proud but haunted man who feels like his detractors have gotten the upper hand and badly wants the American people to understand his side—and to use this softball-throwing Frost to give him a fluffy platform to get back into the big game in Washington. What's at stake? To win back the public, he must avoid anything that would acknowledge guilt or responsibility.

What this film most inherits from stage theatre is in its dependence on solid and engrossing acting to carry the drama. Having not seen the play, I don't know how Sheen and Langella changed their performances from what they did on stage, but they are mesmerizing here. Sheen (The Queen) plays Frost as a charming but seemingly shallow chaser of the limelight—with more going on inside than he lets on. Meanwhile, Langella (Good Night, and Good Luck) carries great confidence in a very tough role: playing an over-characterized public figure. Langella does not simply do an impersonation of Nixon. Instead, he creates his own living, breathing version of Nixon. At first I thought, Huh, he doesn't really look or sound like him. But by the end, I was thinking, This man is Nixon. After collecting a lot of hardware for this character on stage, Langella will again be in line for a lot of recognition, including a probable Oscar nomination.

The solid acting doesn't stop with Sheen and Langella. When a film fills somewhat small, supporting character roles with actors of the caliber of Oliver Platt, Kevin Bacon, Sam Rockwell (TheAssassination of Jesse James by the Coward Robert Ford), and Matthew MacFadyen (Pride & Prejudice), it shows an impressive attention to craftsmanship and art.

While fans of politics and history will enjoy Frost/Nixon, it also has wider appeal. Besides, it's really not about politics. And it isn't 100 percent historical. (I mean, did Nixon really call Frost late at night and talk cheeseburgers?) But it is a film that audiences will enjoy simply as good filmmaking, a fine actors' showcase, and a scintillating story about the different motivations that control our actions when cornered in the ring.

Frost/Nixon is rated R for some language. There's quite a bit of coarse language including f-words and the Lord's name used in vain. David Frost is portrayed as a swinging bachelor involved sexually with various women. He is shown in bed with one woman; when she leaves the bed, she is nude but the shot is very fleeting and in the shadows. At one point, Nixon bluntly asks him, "Did you do any fornicating last night?"