For nearly three decades from the 1970s onward, Woody Allen was the most New York of all New York directors. From Annie Hall to Manhattan Murder Mystery, the Big Apple was the muse of this Brooklyn-born auteur. But in his last three films—Match Point (2005), Scoop (2006), and now Cassandra's Dream—Allen has found a new urban inspiration: London.

He has also shifted themes toward more deadly serious drama, at least in the case of Match Point and Cassandra's Dream. Those of us who prefer this Crimes and Misdemeanors-type Allen are doubtless happy about this trend. Cassandra's Dream is certainly not a crowning career achievement for Allen, but it's a solid companion piece to Match Point.

Ewan McGregor and Colin Farrell as brothers Ian and Terry

One of many things Dream and Point have in common is a profound undercurrent of class-consciousness. Perhaps this explains Allen's turn toward Europe as a setting. America, after all, is among the least class-concerned countries in the West. In England, however, stratified wealth is a huge issue (see Altman's Gosford Park for a good example of this). Like Match Point, Cassandra's Dream explores the ambitions of young working class lads trying to infiltrate the aristocracy and move up in the world.

Dream begins with two working class brothers, Ian (Ewan McGregor) and Terry (Colin Farrell), purchasing a sailboat with money they don't yet have. Terry is a mechanic with a poisonous penchant for drinking and gambling (they name the boat "Cassandra's Dream" after a 60-1 winner at the dog races), though he has a soft heart and rather meek ambitions in life. Ian is the more high-minded of the pair—a Gatsby-esque playboy with a keen mind for the importance of appearances. He dates, deals, and associates with people well above him on the ladder of success, and is desperate for a chance to ditch the family restaurant business for bigger and better things ("I wasn't put on this earth to run a restaurant"). These boys are affable and normal enough—which makes their bourgeois struggles all the more resonant. Unlike Match Point, in which the protagonist was a rather unlikable miscreant, these guys are simply trying to do better by themselves. Unfortunately they make some poor decisions along the way.

Ian and Terry hatch some sinister plans in the story

By the end of the first act, both Ian and Terry are in dire need of a lot of quick cash (always a foreboding setup). Ian has a new actress girlfriend, Angela (Hayley Atwell), who thinks Ian is a successful hotel entrepreneur, owns a Jaguar convertible, and is a proven member of the leisure class (all false). So as not to lose her, Ian needs a lot of money to prove he belongs in the country club life. Meanwhile, Terry needs to pay off 90 grand in gambling debts, lest the loansharks "break his legs" or worse. Fortuitously—or fatefully—rich Uncle Howard (Tom Wilkinson) comes to London from abroad with deep pockets and a mercenary proposition for his nephews: I'll give you all the money you need, if only you do something rather substantial for me. That "something," of course, turns out to be a murder-for-hire.

The rest of Cassandra's Dream follows the moral process of two relatively moral men who must choose between their material success and their souls. As with Match Point, the specter of Dostoevsky and his "super man" ruminations hover closely in the foreboding frames of Dream. Both films feature characters wrestling with the possibility of sacrificing another person's life for the sake of their own personal success or happiness. At the end of the day it's about rationalizing sin. Even when you really don't want to hurt anyone else, sometimes you do it to save yourself. As Terry tells his brother late in the film: "Nobody wants to be selfish, but everybody is."

Tom Wilkinson as Uncle Howard who has quite the proposition

Another big theme of this film (also found in Match Point) is the idea of chance and irony. "I think we make our own fate," Ian tells Angela. Though as the film goes on, we see just how much Ian's fate is not in his own hands but rather in the hands of others—especially his brother's. There is also a bit of self-reflexivity going on here, as during various "play within the play" scenes we get lines like "It's a very moral play, don't you think?" or "Life is nothing if not totally ironic." Here we see Woody Allen (who also wrote the script) commenting on his own craft—tipping the audience off to the fact that Dream is not going to be a feel-good, life-affirming film as much as a borderline-nihilistic fable.

Some might criticize Allen and this film for its achingly bourgeois, on-the-nose sensibility. In my view, however, the somewhat flat (that is, normal) temperament of these characters rings very true, all the more because it feels obvious. Farrell and McGregor deliver remarkably nuanced performances in and through their mundane one-dimensionality. That is, they take average Joes and give them average strengths and weaknesses—something that in cinema is kind of daring. Unlike Sidney Lumet's Before the Devil Knows You're Dead—a film with a strikingly similar plotline but with far more extreme, depraved characters—Cassandra's Dream feels like it could actually happen. It was hard for me to believe that the two brothers in Lumet's film could be so cruel and cold-blooded, even in their desperate need. But Allen's film, though it sacrifices some flashy, high-impact drama, feels strikingly more authentic. 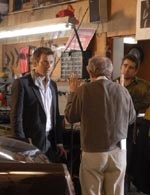 The stars with director Woody Allen on the set

The style of the film is similarly unembellished, with a few noteworthy flourishes here and there. Philip Glass's score is nicely attentive to the themes of moral disintegration, and the cinematography by Vilmos Zsigmond is equal parts working class and luxuriant, full of contrast and smart mise en scène. There is a nice visual motif with greenery (shrubs, trees, etc), for example, that evokes the temptations of Eden (the two key moral decision scenes are photographed with the characters obstructed by greenery).

As with Match Point, the third act of Dream is the "punishment" part of the Dostoevskian binary. Ian and Terry must atone for their sins, which predictably have quite toxic spiritual/psychological consequences. Because guilt is so much a driving force of these characters' self-destruction, it is appropriately ironic that the ending is on the boat, out at sea, in the midst of a cleansing body of water. So much of the biblical language about the ridding of guilt has to do with washing it away (Heb. 10:22, 1 Cor. 6:11), and even if Allen's intent is less redemptive than restorative, it is nevertheless interesting that he ends the film here.

It's a reckoning of sorts, as Ian and Terry come face to face with their own human nature and flawed ambitions. The film starts out with man buying into a dream, and—as with all of our lives—it ends with him paying for it.

Cassandra's Dream is rated PG-13 for thematic elements, some sexual material and brief violence. Considering the subject matter (murder and cover-up), the film is relatively clean. There is not a lot of offensive language, only a few brief scenes of violence (mostly offscreen), and one or two mild sexual situations. That said, the material is very dark and the moral decisions of these characters are certainly not to be emulated.