Kyiv pastor Sunday Adelaja believes the world is his parish.
Interview by Susan WunderinkOctober 17, 2008
This article is from the October 2008 issue. Subscribers can read all of CT's digital archives.

Sunday Adelaja is the founder and head pastor of the Embassy of the Blessed Kingdom of God for All Nations, an independent charismatic church centered in Kyiv. Embassy, claiming 25,000 congregants, is the largest evangelical church in Europe.

You are the most prominent leader at Embassy of God. Do you think it would stand without you?

Oh yeah. That's why I only do one out of 40 services every Sunday. With all the attacks that I have and with all the criticism, I know that I will not be here forever. So I needed to do the church in such a way that even the people who are here when I preach—I do it in a such a way that they are not attached to me.

Many evangelical pastors admit that many of their congregants participated in the Orange Revolution, but they won't say they instigated it. Yet you claim responsibility.

I claim responsibility that the Christian church here played a role. When the rigging of the election was going on, people went ahead and went out following the example [of] what we had done. We were calling people to come out to join, to fight for democracy. No other church did that because everybody was afraid. You see, it's also a unique thing in this culture that anybody at all, especially a religious leader, a pastor, would be bold to tell people what to do. But I'm not from here originally. I don't have the Soviet limitation. I don't care. I'm just doing the will of God.

What is your relationship to leaders of other churches?

Everybody is so skeptical. People all over Ukraine don't understand what this is. They're saying, "Maybe you are being sponsored by Americans. Maybe you are an agent of the cia. Maybe you use black magic like black people."

The Christians know that we don't do that. But even the evangelicals ... 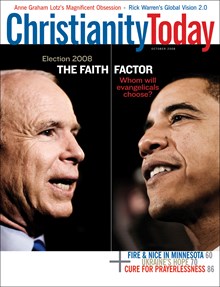 This article is from the October 2008 print issue. Subscribe to continue reading.