The regular film world has the Coens, the Wachowskis, and the Farrellys—brothers who collaborate on producing and directing both blockbusters and arthouse flicks.

The Christian film world has the Kendricks—a couple of associate pastors in Albany, Georgia who made a couple of ultra-low-budget movies with a mostly volunteer cast and crew as part of their church's outreach program, and then hit it big when the second film, Facing the Giants, grossed just over $10 million at the box office.

Now they're putting the finishing touches on their third film, Fireproof, due for a theatrical release on September 26. The film concerns a firefighter whose marriage is on the rocks, and whose father challenges him to take "the Love Dare"—a series of recommended activities that might, just might, help patch things up.

In some ways, the Kendricks' films, all produced through Sherwood Pictures, have gotten bigger and better. The budgets have increased exponentially—from $20,000 on their first film, Flywheel, to $100,000 on Facing the Giants and now $500,000 on Fireproof. The sounds and visuals show more technical polish. And their newest film even has a professional Hollywood actor—Kirk Cameron—in the lead role.

But Fireproof remains a ministry, produced almost entirely by members of Sherwood Baptist Church in Albany. And the Kendricks wouldn't have it any other way. 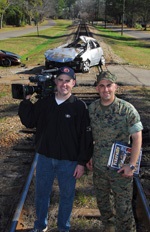