A team of guards plans to rob the armored trucks they're sworn to protect, until one of them has a crisis of conscience in this so-so action thriller.
Russ BreimeierDecember 7, 2009
Our Rating

When a movie isn't screened for critics, it's often a sure sign that it stinks—but there are occasional exceptions. Case in point: Armored. There's no good reason why this little action drama should've been kept from critics. It's certainly nothing to rush out and see in the theaters, but it's at least worth a rental or televised viewing.

Like 1992's Trespass took inspiration from 1948's The Treasure of Sierra Madre, this movie similarly plays like a modern, urbanized western. Imagine a gang of bandits planning to steal from the stagecoach they're sworn to protect. But when it's time for the big heist, one of them decides he's into more than he bargained for. When he tries to do the right thing, the others turn against him. But with Armored, we're talking about security guards and armored trucks rather than cowboys and stagecoaches.

We meet our hero and villain right away without initially knowing which is which. Ty Hackett (relative newcomer Columbus Short) is a decorated Iraq War vet struggling with his teenaged brother Jimmy (Andre Jamal Kinney) to make ends meet. Ty's godfather and friend, Mike Cochrone (Matt Dillon), gets him work with his team of armored truck security guards, including Baines (Lawrence Fishburne), Quinn (Jean Reno), Cobbs (Skeet Ulrich), and Palmer (Amaury Nolasco). Ty's grateful because he's facing foreclosure on his home, and child welfare is threatening to place Jimmy in foster care if things don't improve.

But right when Ty earns his badge, Mike lets him in on a secret: His team is planning to rob the two trucks placed in their care on a day when the take is $42 million. They just need to know if Ty's on board with the heist. Ty is reluctant to do so, but $7 million would sure help pay the ... 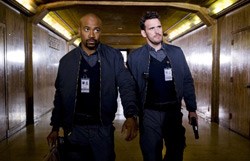