The acting and poignancy are much more than fine; unfortunately the film gets marred by a heavy-handed message. (Plus: Interview with director Kirk Jones.)
Camerin Courtney|December 4, 2009
Our Rating

What happens when the person who serves as the glue of the family dies?

This is the precarious question Frank Goode (Robert De Niro) wrestles with in the wake of his wife's death, though he doesn't realize it at first. In fact, he doesn't even realize how strained his relationships are with his four children, who are all now grown and living out of state.

His wake-up call occurs during his first attempt to gather all four kids around his dining room table. One by one they all back out, phoning with flimsy excuses as to why they can't make it. Since he's newly retired and doesn't quite know what to do with himself yet anyway, Frank decides to embark on a series of surprise visits to his kids. But, of course, he's in for many surprises of his own.

Against the advice of his doctor (Frank has fibrosis of the lungs brought on by decades of breathing the PVC coating he's applied to millions of miles of telephone wires), Frank packs up his suitcase and boards a train for New York City, where his son David—the successful artist—lives. Unfortunately, David's not home.

So Frank hops on a bus bound for his daughter Amy's (Kate Beckinsale) house in Chicago. She's the high-powered advertising exec with the huge house and happy family. Then he goes to Denver to visit Robert (Sam Rockwell), the big-time symphony conductor. And finally on to see Rosie (Drew Barrymore), the lead dancer in big Vegas show.

But along the way Frank realizes everyone isn't as fine and successful as he'd thought—at least the way he'd define those terms. As he traipses across the country, Frank begins to wrestle with why his family hasn't been altogether honest with him—and what they're possibly keeping from him now.

Along this journey, there ... 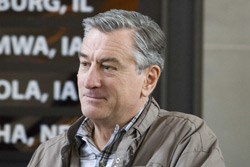