It matters not how strait the gate,
How charged with punishments the scroll.
I am the master of my fate:
I am the captain of my soul.

This is the final stanza of "Invictus," written by Victorian poet William Ernest Henley after having his tubercular foot amputated. The word invictus is Latin for "unconquered," and in this poem Henley defies the difficult circumstances of his life to conquer him.

A century later, inside a South African prison, Nelson Mandela would take consolation from this poem. And so, from director Clint Eastwood, we get the film Invictus, which tells the story of how Mandela (Morgan Freeman) used the 1995 Rugby World Cup to unite and inspire a post-apartheid South Africa. Mandela was coming off 27 years of imprisonment for his activism against apartheid, having been released in 1990 and then, in 1994, through South Africa's first-ever multi-racial democratic elections, elected as president. It was the end, at last, of apartheid.

But the nation remained deeply divided. Many whites resented and feared this loss of power, and many blacks couldn't just shrug off those decades of disenfranchisement. As Invictus shows, one emblem for this division is the South African national rugby team, known as the Springboks. The team had been all-white for many years, and in the run-up to the 1995 World Cup had only one non-white player. Consequently, many black South Africans—an imprisoned Mandela included—would cheer for opposing teams during international matches.

Once Mandela becomes president, however, his top priority is reconciliation. For this he sees an opportunity in the Springboks. The 1995 World Cup was going to be hosted by South Africa, and Mandela wants his country—all of it—to get behind ... 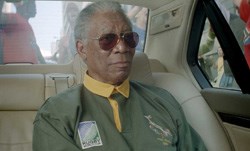