Will anyone ever make a Christian version of Spinal Tap? For fans of the Christopher Guest-style mockumentary (Spinal Tap, Waiting for Guffman) who have grown up in the easily parodied evangelical subculture, we now have an answer. And its name is Jesus People: The Movie.

Jesus People, a Christian-made parody of evangelicals, was created by professional comedy writers and actors in Hollywood. The film is a feature-length version of a six-episode online series that debuted early in 2008 on Independent Comedy Network (ICN), sort of a "minor league" for shows hoping to make the jump to the bigs—traditional TV or, in this case, film. It's currently on the 2009 festival circuit; it will screen at the Gospel Music Association's annual celebration week in April, and will likely be released on DVD in the late summer or fall.

The Jesus People online series—a web hit, with more than 500,000 views—tells the satirical story of Cross My Heart, a Christian dance-pop band-in-the-making. The four-person, coed group—an homage to Christian dance-pop classics like Jump 5—includes an aging CCM pop star trying to resuscitate her career after a sex scandal (played by Edi Patterson), a newbie Christian party girl with a wild streak (Lindsay Stidham), a goody-goody fundamentalist with a fondness for God's wrath (Damon Pfaff), and a token minority member who plays the sympathetic everyman (Rich Pierrelouis). The cast also includes the group's pastor/manager/entrepreneurial handler Pastor Jerry (Joel McCrary), and an impressive array of guest stars from across the comedy spectrum, including SNL's Victoria Jackson, The Office's Kate Flannery, Will & Grace's Tim Bagley, and Waiting for Guffman's Deborah Theaker. 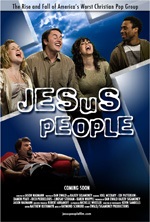