Two foreign films poignantly illustrate that our quests for the perfect job—more money, more stuff—might miss the point of what really matters in life.
Jeffrey Overstreet|June 3, 2009

Layoffs, bankruptcy, skyrocketing unemployment. Tough times, busy days for job hunters, and everybody's got an opinion about what went wrong and how to fix it.

Movies about employment tend to give us rags-to-riches success stories: Young people with a dream overcome impossible odds and prove the naysayers wrong, earning fortune and glory through determination. But is that really the story we need right now? Maybe there's something more useful than the assurance that we'll all get our dream jobs, we'll all succeed, we'll all step into the spotlight if we just keep on trying.

This summer, two extraordinary new films offer moviegoers very different visions of success. Their characters learn hard lessons about humility, as their dreams come crashing down (in one case, quite literally). But they also learn a thing or two about finding fulfillment in something more than spotlights and paychecks.

Have you ever prepared a dead body for incineration? I doubt you'd jump at the opportunity.

But Daigo Kobayashi (played by Masahiro Motoki) is desperate, and that's the job he's been hired to do. He's just moved home from Tokyo, grieving the dissolution of the orchestra in which he was achieving his dream as a concert cellist. Now he's stuck with the bill for his expensive cello—the symbol of his failing dreams. "It's been an awkward time," he says. No kidding.

After all, this work is considered shameful in his culture. The "burakumin" were once outcasts, condemned ... 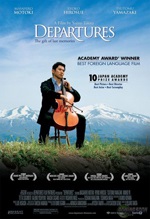