Hard to believe that the original producers of the campy Saturday morning adventure from the '70s are also responsible for this extremely crude, juvenile, and unfunny remake.
Russ Breimeier|June 5, 2009
Our Rating

It's not as if the public was clamoring for a remake of Land of the Lost. Young and old generally remain ignorant of the short-lived Saturday morning television program from the mid-'70s with campy dialogue and Z-grade special effects. As for the forty-somethings that actually remember it from their childhood, they typically regard it with nostalgia or embarrassment (if not both). I caught a few episodes during a recent TV marathon—to call Land of the Lost cheesy is an insult to cheese.

Yet who would have guessed that a big-screen adaptation could sink even lower? Sure, Hollywood has screwed up TV shows before, but you'd think a modernized Land of the Lost with better production values would play as well as the 2008 remake of Journey to the Center of the Earth. Instead, the filmmakers have aimed for the lowest common denominator with a movie too juvenile for adults and too crude for kids. If you hated the show before, chances are you'll hate this even more. If you loved it, prepare to find your precious childhood memories drenched (literally) in dinosaur pee.

Tone is the first big problem here. The filmmakers can't decide whether or not they're paying homage to the original or mocking it; that blend worked rather well for The Brady Bunch movies of the '90s, but not so much this time. Beyond sharing the same names, the characters in this movie have little in common with those of the series. Instead of a wholesome park ranger and his two children who accidentally find a bizarre lost world, we have three unrelated (and unlikeable) adults—two vulgar nitwits and a generic female in tight shorts for ogling.

The show's familiar elements are present at least. Creatures such as the ape-like Pakuni and the reptilian Sleestak, ... 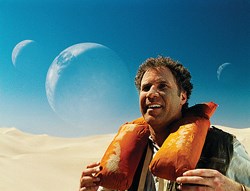