The sequel to The Da Vinci Code is marginally more entertaining and a bit better in its treatment of religion, but it's still fundamentally silly and inaccurate.
Peter T. Chattaway|May 15, 2009
Our Rating

It may have been boring and heretical, but the film version of The Da Vinci Code was also one of the biggest international hits of all time when it came out three years ago—bigger than The Passion of The Christ, bigger than the Narnia movies, bigger even than at least one of the Star Wars movies. So it was pretty much inevitable that Tom Hanks and director Ron Howard would reunite for an adaptation of the other Dan Brown novel that features Harvard symbologist Robert Langdon. (A third novel is now due to come out later this year.)

It was also pretty much inevitable that reporters looking for a story—and the filmmakers, looking for publicity—would try to stir up some controversy around the sequel, which is called Angels & Demons. But for most people, the new movie could be fairly easy to ignore, and not just because there have been fewer calls for boycotts and the like this time.

For one thing, the new story just doesn't push the same kind of buttons that the old one did. The Da Vinci Code made bogus claims about Jesus himself, and thus had something to offend Christians of every denominational stripe. But Angels & Demons focuses entirely on the relationship between modern science and Roman Catholicism—and thus many people, especially non-Catholics, may be inclined to just yawn and shrug the movie off.

Those who do see the film could very well find their eyes rolling within the first few minutes. As the story begins, the Pope has just died, and cardinals from around the world have come to the Vatican to elect his successor—and a voice-over, possibly that of a reporter, gravely informs us that Catholics around the world "now find their church at a crossroads, their ancient traditions threatened by ... 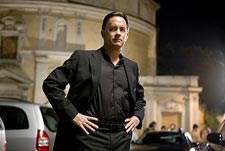