A contract killer and an abused housewife strike up an unlikely friendship in a story of guilt, grace and everything that falls in between.
Brandon Fibbs|May 1, 2009
Our Rating

When we first meet Kate (Kelly Macdonald), she is nursing a lavender shiner. It doesn't take us long to figure out that her abusive husband (Bobby Cannavale) is responsible, a cop sworn to serve and protect but who instead takes out his frustrations on his wife's face. Kate flees home and heads to Chicago to start a new life. While leaving work one night, she happens to glance up at the falling snow and catches sight of a man standing on the ledge of a building across the street, poised to jump. Luckily, Kate's scream scares him off the roof, an act her co-worker deems nothing less than a "Christmas miracle."

The man is Frank (Michael Keaton), a melancholy, contract killer of few words (it's half an hour in before we hear him speak). Business is booming and Frank is knocking off targets right and left, including one in Kate's building with a sniper rifle just moments before when she catches sight of him. But it isn't enough that Frank kills others—he wants to kill himself as well. And he very well may have too, had Kate not intervened.

Some time later, Frank "coincidently" meets Kate in front of her apartment building. Has he come to kill her to ensure she can't identify him to the police who have already been asking her a lot of questions? Or is he merely fascinated by his guardian angel? Whatever the reason, she doesn't recognize him and he ends up helping her carry her cumbersome Christmas tree up the flights of stairs to her apartment.

So begins a most unlikely friendship, more paternal than romantic. Frank and Kate are both utterly lonely and utterly alone. Craving contact, they fall into step with one another, not saying much, but just glad to have another beating heart in the room. Both are obviously very wounded ... 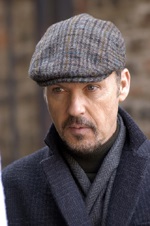