On the first page of The Road—Cormac McCarthy's Pulitzer Prize-winning tale of father/son survival in a post-apocalyptic world—we are introduced to a world of darkness and gray, stinking robes and plastic tarpaulins, bleak lifelessness "like the onset of some cold glaucoma dimming away the world." But amidst this hell we see a father reaching out to touch his child.

John Hillcoat's film version also opens with this scene, perfectly capturing from the outset the spirit of "love among the ruins" that makes McCarthy's book a true 21st century classic. It's a timeless, ancient story of humanity that recalls the first spark of fire in the primeval caves; but it's also a story of our time, perhaps the truest and most important piece of post-9/11 literature we have. Coming as it does in the waning months of this tumultuous decade, this cinematic adaptation is everything it needs to be and more. This film is of the finest order and an impressively restrained, quietly humane work of art for our fragile times—a triumph of beauty, tragedy, prophecy and redemption.

The film's story—faithfully adapted by playwright Joe Penhall—is simple. Set against the backdrop of an unknown apocalypse, we follow "Man" (Viggo Mortensen in his career-best) and "Boy" (then-11-year-old Kodi Smit-McPhee), unnamed because the world is too far gone for such luxuries as names. The father-son duo are survivors in a not-too-distant future in which nature is dying, fires rage, ash permeates the air, and those who aren't cannibals are relegated to scavenging for dead bugs. The Road follows this pair on their perilous journey to the coast, a place of perpetual hope in which the air might be warmer and the food might be easier. It's an ... 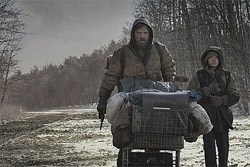