Michael Cera shows both his naive and nasty sides in this adaptation of the cult classic novel.
Alissa Wilkinson|January 8, 2010
Our Rating

I cannot be the only one who suffered through this experience: as a high school student who had been raised on books (mostly nineteenth-century novels) and not television, I had an abnormally large vocabulary, but not much experience with the world outside my own. I would whip out a five-dollar word that I'd never realized people only use in books, like nefarious, or irascible, or depredation. The situation worsened when I went to an engineering college and got equally cross-eyed looks for saying engender or innocuous. Sufficiently shamed by a body of knowledge I didn't even realize I had, I stopped using big or obscure words. I was weird.

Youth in Revolt, based on the novel with a cult following, is a story for us of the big words and the naïveté—who were sometimes good, not always because we wanted to be, but because we couldn't figure out how to be bad. Nick Twisp (Michael Cera), a high school student, loves books, foreign films, and jazz. His parents—emphatically not aesthetes—are divorcing, and each has their own inappropriate live-in paramour. But Nick lives with his Mom (Jean Smart), and when her boyfriend, Jerry (Zach Galifanakis), ends up with people coming after him, they decide to get out of town quick via a spur-of-the-moment, week-long vacation to the beach.

Nick is a misfit in his world, but during this brief exile he meets Sheeni (Portia Doubleday), a beautiful girl who also can converse intelligently about the French New Wave. She's the perfect girl for Nick, but she has a mysterious boyfriend and some exceedingly religious parents (their two-story trailer home's doorbell plays "Rock of Ages"). Nick falls desperately in love with Sheeni, but must return home. So he concocts a plan ... 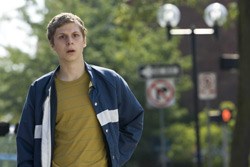