If two new documentary films are any indication, Christian Zionism is officially on notice. The filmmakers of Waiting for Armageddon (First Run Features) and With God on Our Side (Rooftop Productions) explore problems with believing that God has a special plan for ethnic Israel and thus politically advocating on behalf of the modern state of Israel. The first film probes the movement from the inside—the politically powerful (and potentially explosive) alliance between evangelicals and Israel. The second is more of an outsider's perspective, examining the situation from a Palestinian point of view.

The three directors of Armageddon are non-Christians concerned about the "unlikely relationship" between Christians and Israel. To learn more, they seek out Christian Zionist professors, pastors, authors, families—even a tour group in Israel. The interviewees explain that the Jewish people must reclaim all of Israel for Jesus to return to earth.

Also interviewed are Jews in Israel who, interestingly, are ambivalent toward their Christian allies. They admit they like the money and political clout the alliance brings, but they resent being seen as pawns in a Christian endgame.

The directors' lack of familiarity with their subject matter both helps and hinders the film. On the plus side, Armageddon steps back and lets Zionists speak for themselves, giving viewers fuller pictures of them as people. Especially revealing is the manner in which the Zionists express their beliefs.

One Zionist describes the Apocalypse with the seething language of Revelation in an utterly matter-of-fact tone. Another man sounds flippant. The emotional disconnect is striking. Since the film forgoes narration, the gaze of the camera at the juxtaposition ... 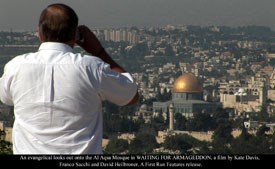 This article is from the July 2010 print issue. Subscribe to continue reading.