On a creek bed in the rural countryside beyond the outskirts of San Antonio, shielded from the late summer Texas sun by the shade of gargantuan sycamore trees, Robert Duvall and Lucas Black are discussing fly fishing.

Or rather their characters in the forthcoming feature film, Seven Days in Utopia, are discussing fly fishing. When director Matt Russell gives the traditional "Cut!" call, the set begins to bustle. The crew and a few spectators in nearby tents exchange headphones that allow them to listen to the actors rehearse, while others rearrange the cameras so the scene can be shot again with Duvall in close up.

CT recently visited the movie set in Utopia; the film will release sometime in 2011. Between takes, Black strolls up the sloping creek bank, past the first line of tents where the actors retreat to the shade, stepping over lines of cable, to talk to members of the media about why two of Hollywood's biggest stars (currently appearing together in Get Low) are filming a movie based on Golf's Sacred Journey, by Christian sports psychologist David L Cook.

An avid amateur golfer, Black—who plays Luke Chisholm in the film—chats amiably about getting tips from PGA star K. J. Choi, who appears as Luke's opponent. As for the film's spiritual content, Black says his character's mentor, Johnny (played by Duvall), is a religious man who regularly quotes Scripture and who, in one scene, takes Luke to a cemetery to "[bury] the lies." Although the story and characters are fictional, the cemetery is an actual place in Utopia, and author Cook reports that he was inspired to write Golf's Sacred Journey after a group of men at Christian retreat performed a similar symbolic ritual. In Black's words, "[That scene is] kind ... 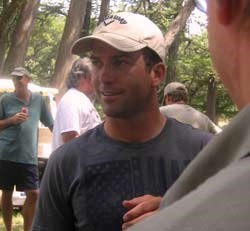