A heist flick rich in drama and complicated characters and relationships.
Todd Hertz|September 17, 2010
Our Rating

Some movies shouldn't be as good as they are. The Town, an adaptation of Chuck Hogan's novel Prince of Thieves, could be one such film. It is, at heart, a routine genre movie: the classic cops-and-robbers heist flick we've all seen before. It has a crook doing his last job, the relentless cop, the nasty neighborhood boss, the Robin Hood thief with a good heart, and the loose-cannon accomplice. And, of course, a big climatic final heist.

But merely listing the standard genre clichés and conventions would do an injustice to the depth and craftsmanship that makes this film rise above most of its kind—even to the point of putting it in a conversation with crime flicks like The Departed and Heat. Director Ben Affleck's visionary story-telling, top-shelf acting, deep characters, and emotional weight put some hefty meat on the tired bones of the genre. What could have been a lifeless actioner is instead a rich drama about complicated characters and their even more complex relationships.

The titular town is Charlestown, a Boston neighborhood portrayed as a sort of bank robber spawning pool. Here, we're told, the nurturing of young thieves is so prevalent that the art is passed from father to son as the family business. That's the case for Doug MacRay (a worn, tattered Affleck), who tried escaping Charlestown but fell back in the footsteps of his criminal father (a smoldering, seething Chris Cooper in a brief but screen-stealing role).

Doug leads a small band of Halloween-masked thugs who commit a series of armored car and bank robberies—starting with a job where they take a hostage named Claire (Rebecca Hall), attracting the attention of FBI agent Adam Frawley (Mad Men's Jon Hamm). When Doug follows Claire to make ... 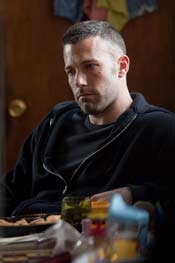