Bethany Hamilton, the young surfer who lost her arm to a shark attack, tells her story as 'Soul Surfer,' the biopic of her journey, hits the big screen.
Mark Moring|April 5, 2011

Bethany Hamilton wants her remarkable story to go to the ends of the earth, but she's not a big fan of interviews. She'd much rather be surfing, or hanging out with friends, and letting others tell her story. She'd certainly rather be anywhere but Chicago in frigid February—especially when home is Kauai, Hawaii—when she dropped by our offices for an interview to promote Soul Surfer, opening in theaters this week.

The 21-year-old Hamilton—who lost her left arm to a shark attack at the age of 13, but through courage, perseverance and a strong faith has nonetheless still become one of the world's greatest professional surfers—was pleasant and polite when we talked about the movie and her inspiring story. But it was obvious that her mind was elsewhere … and who can blame her? How many times can she tell her story? Yes, I was attacked by a shark. Yes, I lost my left arm. Yes, I got back in the water after three weeks. And yes, my family and my Christian faith were a huge part of my recovery and journey. And so on.

But something really cool happened at the end of our interview, when a colleague brought her tween daughter by to meet Hamilton. For the young girl, Hamilton was a hero, a role model, an example of overcoming tremendous odds, and a model Christian to boot. The girl was shy but clearly giddy about meeting Hamilton—and Hamilton was clearly thrilled to meet the girl. They chatted amiably for a few minutes, Bethany gladly gave the girl her autograph, and took a few pictures together. Hamilton was in her element—winsomely relating to another young person, encouraging, exhorting.

Here's a little more we learned about Hamilton during our conversation.

What did you think of the movie? 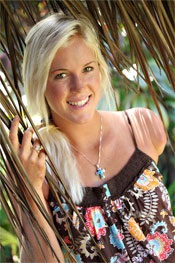