Josh Garrels is out on a limb. And that's no mere idiom. Idiotic, maybe. Reckless, certainly. Because at the moment, he's scampering about the highest branches of a tree, hamming it up like a gangly Tarzan—he's a skinny 6-foot-4, with the wingspan of a condor—swinging, swaying, swaggering. He's climbing trees with friends, and one of them is a girl he's trying to impress.

When he's sure she's looking, Garrels takes a flying leap from one branch to another, nothing but air between him and the ground far below. He sticks the landing. The girl is both aghast and astonished. And she's sold. This is the man—the crazy, passionate, Jesus-loving man for whom carpe diem barely begins to describe the way he embraces life—she is going to marry. "I was smitten," she says today.

Garrels was too, from the moment he met Michelle Ramsdale just a couple days earlier in that summer of 2001. She had grown up in Peru as a missionary kid and, as a young adult, had returned there to work with Food for the Hungry. She had come to Muncie, Indiana, for her brother's wedding, where Garrels was scheduled to play. They met at the rehearsal dinner, and "I knew it pretty instantly," says Josh. Michelle concurs: "Instantly."

When Michelle returned to Peru, Garrels was suddenly interested in taking his first "missions" trip—to the jungles of Peru, where they also have trees with high branches. For Josh, it was another leap of faith—metaphorically and literally—in a life that has been (and still is) defined by taking one leap after another. 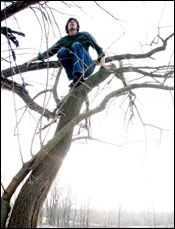