The franchise comes to a satisfying close with an emotional and action-packed finale.
Russ Breimeier|July 14, 2011
Our Rating

It's been just shy of ten years since first bringing Harry Potter to the big screen, but with $2 billion grossed so far, it's the most lucrative franchise in movie history. Harry Potter and the Deathly Hallows: Part II, the eighth and final film, is sure to add to those lucrative numbers while also satisfying fan expectations.

The movie hits the ground running even before the Warner Brothers logo appears. There's a repeat of the previous film's final scene: Voldemort (Ralph Fiennes) taking possession of the powerful Elder Wand. Then we see Harry (Daniel Radcliffe) on the beach mourning the loss of Dobby the elf. (If either of those elements are spoilers, you shouldn't be watching this movie!) And like a wizard disapparating, BAM!, we're on our way for a briskly paced, never dull movie experience, clocking in at just over two hours.

It's enough to catch you off guard if you're not fully prepared. Unless you're a fan with a strong recollection, consider re-watching the first Deathly Hallows movie, skimming through the first twenty-three chapters of the book, or at least reading a who's-who of the long list of characters in the Potter universe before seeing Part II.

The story continues as expected. Harry, Ron (Rupert Grint), and Hermione (Emma Watson) are looking for the Horcruxes—items in which the evil Lord Voldemort stores parts of his soul to become invincible. Their search leads them to a daring heist in the depths of Gringotts Bank for wizards, and then a long-awaited return to Hogwarts (largely absent from the previous film), where things stay for much of the film's remainder, as Voldemort lays siege with his minions, leading to all-out war on the school grounds.

Part II plays like The Return of the King in The Lord ... 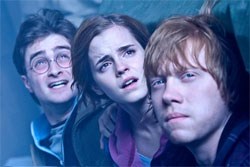