When Carol Everett speaks of the horrors of abortion, you listen. Not only did she abort three of her own children, she went on to abort 35,000 more in the early 1980s as director of several abortion clinics in the Dallas area. She was on track to earn $1 million a year—earnings that today she calls Blood Money (independent), the title of a documentary now on DVD. (It's also the title of a book that Everett wrote nearly two decades ago.)

Just 80 minutes long, Blood Money covers a lot of ground, fully delivering on its subtitle—The Business of Abortion—by letting people like Everett and others tell their stories. Everett, who left the business in 1983 after a conversation with a pastor, is now a strong voice for the pro-life movement. "Abortion is a skillfully marketed product sold to a very frightened person in crisis," she says in the film. She tells how her clinics' telephone counselors—whom she described as "telemarketers"—used a script to convince teen girls and young women to get abortions. The "counselors" were evaluated on how many abortions they "sold," and those who sold the most got the biggest bonuses.

The film is narrated by Dr. Alveda King of the Catholic pro-life group Priests for Life and niece of the late Martin Luther King Jr. She notes that her uncle was all about justice and the right to life—the same ideals embraced in this film. While religion clearly motivates many of the principal figures here, it's not a "Christian" movie. But faith clearly runs just beneath the surface.

Blood Money follows a fairly linear narrative, beginning with scientists and biologists stating in no uncertain terms that life begins at conception. Experts and scholars then discuss how the Supreme ... 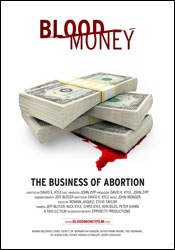