A discussion-worthy film about fate and free will that's ultimately a love story.
Camerin Courtney|March 3, 2011
Our Rating

Is the course of your life solely a result of your choice, or are there other, larger forces at work? These are questions theologians and philosophers have been debating for centuries. And these are the questions at the heart of this romantic thriller.

The main life in question here is that of David Norris (Matt Damon), a young New York politician. Just moments before giving an important speech, he meets Elise (Emily Blunt), a free-spirited ballet dancer to whom he's instantly drawn. She inspires him to give a speech that boosts his political career, then she disappears. But, as luck—or perhaps fate—would have it, David runs into her on a bus soon after. 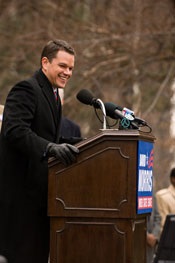 However, when David arrives at work that morning, he sees something he shouldn't—a bunch of guys in suits and fedoras reprogramming the brain of his business partner. They explain that they're part of the Adjustment Bureau, the people who make sure things happen according to The Chairman's plan.

And while they're at it, they inform him he's not supposed to be with Elise either—it'll ruin The Plan for his life and hers. Richardson (John Slattery), the main adjuster, wrestles her number from him and then warns David that if he tells anyone about what he's seen, they'll wipe out his mind.

But David isn't that easily daunted, pursuing his own wishes and plans at the apparent peril of his political career. Throughout, he's alternately hindered and helped by the main agent assigned to his case, Harry (Anthony Mackie), the conflicted adjuster. Both men wrestle with issues of free will and fate and what their role is in both. 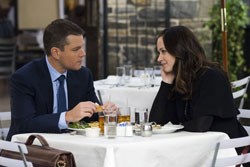 We viewers are brought along for the ride, weighing these heavy matters in a world where God is a corporate boss-type who has a personal and good plan for each life but who's also impersonal and manipulative. His agents—or angels—are 1950s mafia types who rough up the natural order of things and then disappear behind secret doors. They show up to perpetrate good—or at least what's deemed good to The Chairman. And while The Chairman is largely absent, pay close attention for his involvement in small, subtle ways.

As a Christian, it's easy to draw these parallels to our faith paradigm—God and angels, his plan, and our free will. However, director and screenwriter George Nolfi is loathe to assign a specific religion or worldview to the story, preferring that moviegoers make their own associations and draw their own conclusions. Nolfi, who has degrees in philosophy and political science and was raised with Christian beliefs, based The Adjustment Bureau on a short story by Philip K. Dick, the self-described "fictionalizing philosopher." This film certainly reflects Dick's recurring themes of authoritarian governments, metaphysical questions, and monopolistic corporations. 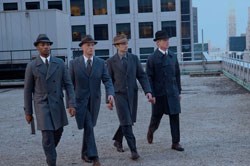 The Adjustment Bureau is on the move

While The Adjustment Bureau touches on these heavy matters, at its heart it's a love story. In the choice between love and power, which wins? What sacrifices will our protagonist make for the woman he loves? Will these two fate-crossed lovers get a chance to be together?

As a love story, Adjustment offers fresh hurdles to the couple in question. Instead of an interloping ex, cultural taboo, or family feud getting in their way, David and Elise are up against agents of fate trying to keep them apart. That's an interesting new rom-dram spin. But sadly the film contains a common love story flaw—not establishing the couple well enough. Why do these two people love each other so quickly and completely that they're willing to test fate for it? We're only given a couple scenes of dialogue to set up this strong bond, and it's simply not enough—though the film almost gets away with this gaffe simply on the skill, attractiveness, and likeability of Matt Damon and Emily Blunt. 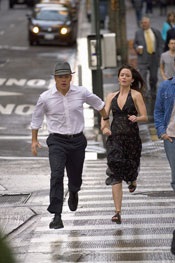 Running from fate … or something

Both actors turn in fine performances here. Damon is on familiar turf as a clean-cut everyman trying to rise above and dodge the bad guys. He previously worked with Nolfi in The Bourne Ultimatum, and you can see shades of that here as he runs through the streets of New York from agents in suits. Blunt's character is less developed—we don't know any of her back-story—but she delivers well on what she's given. Most impressively she pulls off the role of a contemporary ballet dancer quite convincingly, with no prior dance training. Together they offer convincing and compelling chemistry.

Anthony Mackie also turns in an impressive performance, perhaps the most nuanced of them all, as a member of the Bureau who starts to question his role, The Chairman's wisdom, and the point of it all.

While not a "Christian" film, it does serve as a great springboard for faith-oriented conversations. It's one of those movies that's fun to unpack with friends, and would be a great one to discuss with people of other faiths, opening the door to conversations about free will, fate, and the role of a higher power in our lives. Of course, if you simply want a fun action-romance, you won't be disappointed either.

The Adjustment Bureau is rated PG-13 for brief strong language, some sexuality, and a violent image. The violent image is a sudden car crash. The drivers are hurt, though we assume not fatally. David and Elise have sex after their first real date, though there's no nudity and the scene is mostly from the shoulders up—fairly mild by current sex-scene standards. Overall, it's a pretty clean film, and would be a good one to discuss with older teens, especially those interested in issues of philosophy.

1 of 4
Matt Damon as David NorrisDavid falls for Elise (Emily Blunt)The Adjustment Bureau is on the moveRunning from fate &hellip; or something